CoEd Alumni among Pinoys that shine in US ballroom tilt 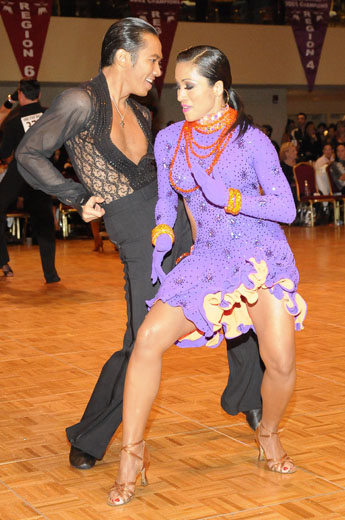 From the highly – related American TV series Dancing with The Stars to the Ohio StarBall, the biggest ballroom competition in the United States, the Filipinos are making their mark.

There has been an added portion in the acclaimed TV show. Junior dancers are now participate in the show. They fielded from among many and a chosen few are asked to join the show live. Judging from the excitement of their family and friends who are sometimes shown during taped portions, this segment will probably become a regular thing for the TV show. Filipinos Craig and Samantha Abaya-Campos from New Jersey bested them all. Three hard-to-impressed judges and the voting audience declared them the Junior Champion of Dancing with The Stars.

At the Ohio Starball last November, where there were over 30, 000 entries – considered the biggest ever, Filipinos showed again their talent. Belinda Adora, former Latin gold medalist for the South East Asian Games and 10-times undefeated National Champion, coached her amateur student Ryan Nicho Jago to the finals to the Final of the Latin Pro-Am A Division. Pro-Am is a teacher dancing with the student, which his popular in the US. Their inclusion in the Finals (the top 6) was a tough feat considering they were unknown in the field of 34 competitors and some of their teachers are past or present champions.

After a very round, Belinda and Ryan’s technique and stamina just kept getting stronger to convince the judges that they did deserved to be in the finals.

Also at Ohio StarBall, Michaela “Pinky” Puno, organizer of The Philippine StarBall, was there not only to promote it and get conformation from Top Competitors and Top Adjucators, but to join the competition herself. She is a Pro-Am competitor too with her teacher Slava Sergiev.

She danced three different styles – open Latin, Silver Smooth and Silver Standard and made the finals in almost her single dances against the field of 40 couples. Pinky was also chosen to represent her region in the Dance Sports Smooth style competition. As a patron of the Arts, the organizers bestowed on her the honor of giving the over all Top Award for the Professional Latin division.

It gives them the opportunity to complete in a formal atmosphere and be part of a first-class production. As one competitor put it, “Where else can we ever be on the same floor with the best in the world?”

Pinky believes Filipino competitors who will join the event will do well in this Open International Ballroom competition. “We have so much talent here in the Philippines. Our dances just need to more disciplined about their practices and commit to give it the dedication and efforts it needs, not for just for an hour a day, but many hours in a day. They will competing against top dancers who practice daily for at least five hours. We can be everything they are too!”

Note: Ryan Nicho Jago is a graduate of the UNO – R College of Education