Pope Francis: cardinals went to the end of the world to find me

University of Negros Occidental - Recoletos - News - Pope Francis: cardinals went to the end of the world to find me 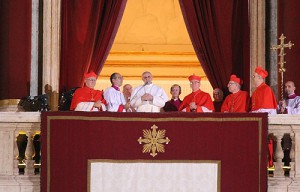 VATICAN CITY, March 14, 2013–Pope Francis began his first words to the Church by saying that the cardinals “went to the end of the world” to find the new Bishop of Rome.

“Brothers and Sisters, good evening. You know that the charge of the conclave was to give a bishop of Rome.

“It would seem that my brothers went to the end of the world to choose him,” he said March 13 from the central balcony of St. Peter’s Basilica.
The Pope then called on the crowd of tens of thousands to pray for “our Bishop Emeritus Benedict.”
“This way of the Church that we commence on,” he said, is one of “an evangelization in this beautiful city.”

Before he closed his remarks, Pope Francis asked the crowd for the favor of praying for him in silence before he gave his blessing.
He then bowed at the waist as silence settled over St. Peter’s Square.
The Pope blessed the throng of people, saying, “I give my blessing to you and all people of good will in the world.”

“I’m going to say goodbye now, thank you so much for your welcome.
I say good night “because tomorrow I want to go and pray to Mary for her protection.”
A marching band playing and the bells of St. Peter’s ringing in the night followed Pope Francis’ first words.
By: David Uebbing