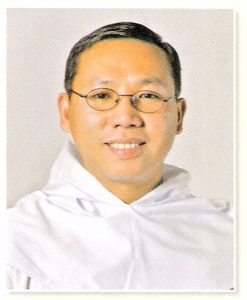 Protocol no. 00103/18 of June 4, 2018, issued by Rev. Fr. Dionisio Selma, OAR, Prior Provincial of the OAR Province of St. Ezekiel Moreno, confirmed the election by the UNO-R Board of Trustees of Rev. Fr. Don Besana, OAR as President of the University of Negros Occidental – Recoletos.

Fr. Don was the Vice President for Academics before his election. He was also the VP-Administration of San Sebastian College-Recoletos, Cavite and he was assigned as Chaplain/ CMO Director at UNO-R in 2001-2003. His former assignments include Cebu, Baguio, Sierra Leone, Baguio, Cavite, and Manila. He made his solemn profession in July 23, 1999, and was ordained to the Sacred Priesthood in December 08, 2000. He was then assigned as Assistant Parish Priest in Our Lady of Mt. Carmel Parish in Cebu City. He was then assigned to UNO-R in 2001 -2003 where he served as Chaplain, CMO Director, UCDO Director and RESOURCE Treasurer and Vice President. He was then transferred to the Casiciaco Recoletos Seminary (2003-2004) in Baguio as Spiritual Director, Procurator, and Vice Prior. Embracing the call for the missions, Fr. Don went to Kamabai, Sierra Leone in Africa from 2004-2006 where he was made as Prior of the community. In 2006 -2013, he went back to the Seminary in Baguio as Spiritual Director, Dean of Studies, Registrar, Vice Prior and Rector. From 2013 -2015, he was assigned to San Sebastian College –Recoletos, Manila as VP-Administration and HRDC Director. And in 2015 he was assigned to SSC-R, Cavite as Vice Prior, VP-Administration, and HRMO Director. Recently, Fr. Don holds a degree in Doctor of Philosophy in Educational Management from St. Louis University in Baguio.