Five UNORians joined the Philippine Model Congress(PMC) last September 9-10, 2017 at the Senate of the Philippines, Pasay City, Metro Manila. The Philippine Model Congress is aimed to redefine the role of the Filipino youth. Through this congress, youth leaders from different cities and provinces of Luzon, Visayas and Mindanao learned the processes used in passing bills and laws. Ms. Barachiel Concepcion (CAHS), Mr. Alvin Go Ping (CoEng), Ms. Carmen Jesusa Legaspi (CAS) and Mr. Dean Victor Montalvo (CAS) joined as delegates; and Ms. Christine Joy Dorias (Faculty of UNO-R IS) joined as an ambassador. They represented not only the university but also the city and province for the 2-day congress. Different parliamentary proceedings and several bills were tackled during the said congress. Congressman Harry Roque was one of the guests and keynote speakers for the congress. He tackled about the procedures they had at the House of Representatives. (CJ Legaspi, BSMC 3, External Affairs volunteer) 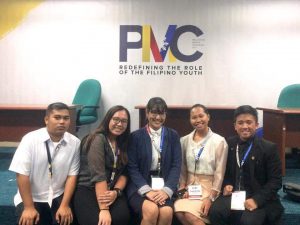