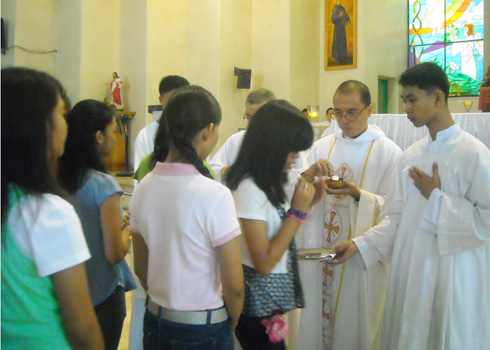 The Grade school Department had their Literary Musical contest.  Pupils came in with their beautiful costumes and unique talents.

Government agencies, NGO’s, PO’s, educators and students were treated to the 3rd Environmental Conference.  Topics like waste segregation, eco-campus and urban greening were discussed.    All these were recapped in an insight of having a communitarian solution to care for Mother earth. Meanwhile, the Energy Development Corporation, through its Binhi Project, Trees for the Future, donated 50 premium native seedlings to  the university for plantation inside the campus.  This is with the idea that with these tress, UNO-R becomes a museum of Philippine heritage trees.  Also, the University,  through UCDO, launched its urban greening project for Bacolod and Negros Occidental.

At 1:30, the UNO-R@50 Executive Committee in cooperation with the Religious Education Department  sponsored the “Brain Challenge Quiz contest” at the university Auditorium.  Fr. Moral, in his opening message,  conveyed to all that there is really a need for one to understand and know thoroughly his history in order to love more.  Thus, the contest  was centered on the history of the University and the Order of Augustinian Recollects.  With this message the Brain challenge started.  Ms. Christina de los Santos of the College of Business and Accountancy emerged as champion.

The day ended with the UNOSSGO UNO-R’s Best Dance Crew.  J-Crew, a group composite of CBA, Engineering and education students bested 5 other groups.

A group of individuals who call themselves “Bacolod Exotic Enthusiasts” (BEE) is having an exhibit during the celebration of the University Week of the University of Negros Occidental-Recoletos.  Their exhibit is at the 2nd floor of the UNO-R Administration building room SA208.  Lek Brodeth, Matt Montalbo, Ace Biene, Fritz Efenio and Monthird Misa have brought some of their precious collections for exhibit.  Some of the exotic animals on display are ball pythons, leopard geckos, green and red iguanas, Burmese and albino Burmese pythons, tarantulas, scorpions, Savanna monitor lizard, Nicaraguan red tail boa, corn snake and sugar glider.  The exhibit aims to educate people about the characteristics and behavior of these reptiles.  They also want to preserve the habitat for these creatures and breed animals especially the local ones and also want to share their passion with other people.

The exhibit is also brought to you by the University of Negros Occidental – Recoletos U-Week Committee and the Office of the UNO-R Public Relations.

Students enjoyinh in the “Exotic Exhibit”.