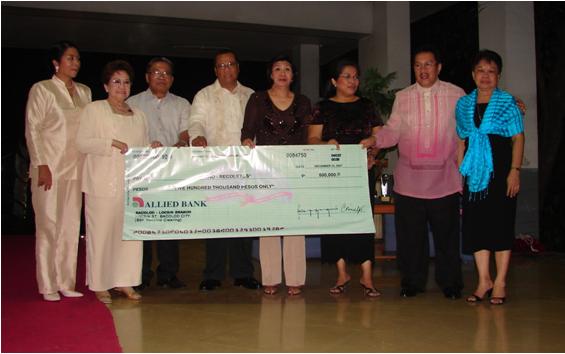 The Recoletos de Bacolod Graduate School (RBGS) held its Graduate School day last December 15, 2007.  It started with the holy Sacrifice of the Mass at the Oratory.  The students had their motorcade around the city and ended with the program at the auditorium.  Parlor games and program presentations were enjoyed by the students of the RBGS.

A red carpet night and dinner was presented in the evening during the launching of the Walk of Fame Scholarship program.  Markers were unveiled by the people behind the UNO-R Walk of Fame project. The walk of fame project was relaunched last August 19, 2007 and many have already responded to it. This is a tribute to the men and women who have made a difference in the society. Their names are immortalized in stones at the pathways of the University Park.

Mr. Antonio Gargarita and Mrs. Connie Po, brains behind the UNO-R “Walk of Fame” project, turned over to UNO-R Director of Scholarships ,Rev. Fr. Emeterio Buñao, OAR and UNO-R Acting President Rev. Fr. Sixto Bitangjol, OAR in the presence of Dr. Milagros Romero, RBGS Coordinator and Dr. Ma. Dolores Ramos, RBGS Consultant the amount of Php 500,000 for the Scholarship program. The amount is taken from the proceeds of the walk of fame project.

Fr. Bitangjol and Fr. Buhay about to open the marker at the UNO-R PARK.