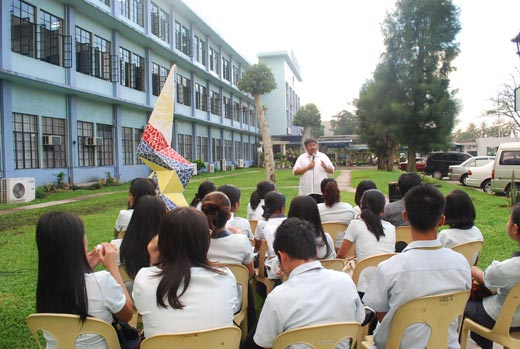 Around one hundred  students attended the said event.  Mr. Howard Sapa of Kabataan Rekoleto gave a brief history and  the present  state of the case of the massacre while Bro. Jaazeal Jakosalem gave the inspirational message. In his message, he sought for the students to have a God, justice and vigilance. He stressed that these are the three things that are required from the young people today.

Statements of support and condemnation were read by the participating groups: Peace Flores and Camille Terrania of Tolentine Star; Benjie Placido of COF; Chona Malinog of the MassCom Dept.;  and Arvin Salazar of UNOSSGO.

Director of Student Affairs Carlos Legaspi,Jr. gave the rationale and recapped the activity. Candle Lighting ceremony followed.  43 candles were lighted for the repose of the souls of the media men who were killed in the massacre. The activity ended around 6:30.