AYALA Finalist makes it to the Congress 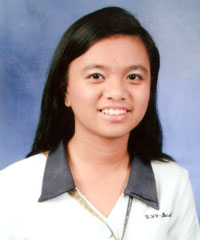 It’s another thumbs up for UNO-R as Janna Mary Lagare, BSED 3 student at the College of Education, who has previously qualified for the final stage of the screening and selection process for the 11th National Ayala Young Leaders Congress (AYLC 2009), has been accepted as official delegate to the AYLC 2009 come February 10 to 13, 2009.

Out of the 142 student leaders from all over the country, Janna Mary was one of those who impressed many of the Ayala Group of Companies executives who served as interviewers during the final screening slated November 19 to 21, 2008.  Thus, she will join 74 other student leaders at the Congress to be held at the San Miguel Corporation – Management Training Center in Alfonso, Cavite.  In his letter, John Philip S. Orbeta, Program Director of Ayala Young Leaders Program and Managing Director of Ayala Corporation, commended UNO-R for molding outstanding youth leaders and leaders and for continuing to build the foundations of our country for the next generation.  CONGRATULATIONS, JANNA MARY!  WE ARE VERY PROUD OF YOU!