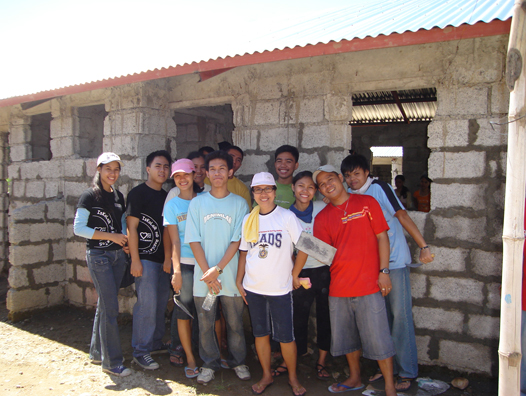 The Recoletos Educational Assistance for Deserving Students (READS) with National Service Training (NSTP) and the Order of Augustinian Recollects (OAR) scholar went to Brgy. Banago last August 31, 2008 to get involved in the program of Gawad Kalinga whose vision for the Philippines is a slum – free, squatter – free nation through a simple strategy of  providing land for the landless, home for the homeless, and food for the hungry.

In preparation for the activity, the UNO – R READS officers and members attended an orientation on the purposes of Gawad Kalinga, the possible activities to be conducted at the venue, and the participation of the READS and OAR scholars in the said endeavor.

As early as 7:30 AM, the scholars prepared for their work ahead. They facilitated the transfer of the hollow blocks from one place to the other. In order to finish the task ahead of time, the group was divided into two teams to conduct the transfer of hollow blocks in two different directions.

One unit of an unfinished duplex house was assigned to the scholars. Armed with the “paleta”, they trimmed the rough edges of the wall and did some warapping. Some flattened the uneven soil inside the house in preparation for the flooring. The others moved the excess soil outside the house.

READS and OAR Scholars taking a pose during the activity

One realization that scholars gained from the activity is how they are lucky to have been blessed with a shelter that can protect them. Despite the exhaustion, they left with a happy heart, contended because they were able to help.