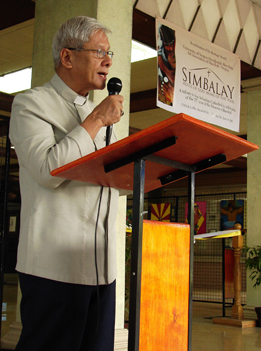 In their continuing pursuit of keeping art alive, the Art Association of Bacolod – Negros is set to stage another remarkable exhibit on May 20 to June 10. This time around, top Negrense artists pay homage to the San Sebastian Cathedral as the Diocese of Bacolod celebrates its 75th anniversary.

The art exhibit is dubbed “Simbalay: House of God, Home of the Poor”. Simbalay is a combination of two Visayan words, “simba” which means going to church, and “balay” which means home. Aptly put, this reinforces the identity of the Bacolod Diocese, upon the advent of Vatican II, as the seedbed of the Church of the Poor in the Philippines.

Several of the paintings in the exhibit show the façade of the famed church in different lights. Among the notable interpretations of this built heritage is the painting of an illuminated cathedral in the evening by Robert de Aro and Dolly Gatuslao’s rendition of the church façade bathed in soft pastel hues. Marlon Domino’s work is a faithful and detailed interpretation that heritage enthusiasts will surely appreciate while Don Barbasa portrayed the church’s heritage marker set in 1952 by the Philippine Historical Committee.

Some of the artists focused their work on the church details: Bro. Tagoy Jakosalem’s mixed media work that fuses actual coral stone material from the cathedral with blue acrylic on canvas and Harvey Salhay’s seemingly coral façade detail done in acrylic.

A social realist thread weaves together more of the art works in the Simbalay exhibit, emphasizing that the Church is truly the haven of the poor and suffering.

Bogie Alvarado’s crucifix is the picture of a stern looking and angst-filled Christ, with the striking contrast of the burning heart in an emaciated body. Dave Palanca reinterprets the agony of Christ in fluid lines, with the church looming in the background.

Jeffrey Montano’s San Sebastian sculpture invokes strong emotions as his portrayal appears to pierce not only the flesh but also the soul. Bopep Montinola’s father and son painting almost painfully reminds us that we are our brother’s keepers especially the downtrodden ones.

In a variety of styles and in different tones, several artists convey a message of peace through the church’s superstructure. Victor Lopez, Jr. presents a vision of hope in his painting that bursts with color while Nune Alvarado’s opus “Peace be with you” carries an equally salient and strong point albeit in rather subdued hues. The work of Telok Lamis entitled House of Refugees captures the notable work of Bishop Fortich in opening the doors of the cathedral during the militarization of the 90’s.

Other noteworthy works include a dali-esque colored Christ done in acrylic by Michael Sernal, searching of truth (transfiguration) by Rusty Quiatchon, mother and child by Bea Mocorro, the bell in mosaic by Joan Mocorro and the picturesque rendition of the cathedral by Francis Zamora.

Simbalay is an excellent celebration of not only art but also church heritage, both built and intangible. At the end of the day, the church is both San Sebastian Cathedral and the people of Bacolod who make a home of the poor in the house of God.

Simbalay artists during the opening ceremony at the university main lobby.