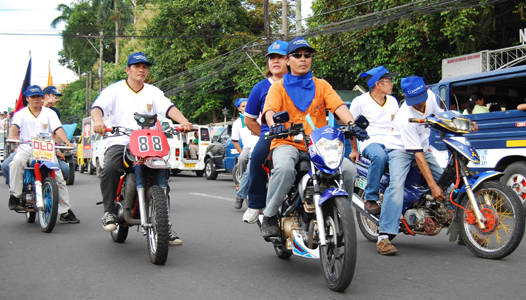 The University of Negros Occidental-Recoletos (UNO-R) Administrators, teachers and students gathered for a street parade to open the University week celebration on September 8, 2008, Monday.

The parade formed through combining the different stations, which were composed of the Administrators and students from the different colleges.
At the first station were OAR Administrators together with the candidates of Mr. and Ms. UNO-R 2008. They started walking from UNO-R while the candidates rode on the van. The Bacolod City National High school Drum and Bugle Corps accompanied them.

The second station was filled with College of Business and Accountancy students who assembled along the streets of Allied Bank in Libertad together with their Dean, Dr. Clifford Salugsugan.

The College of Engineering with their Dean, Engr. Christopher Taclobos, made up the third station along the streets fronting Taytung High School.

The College of Arts and Sciences followed the line as they waited along the streets in front of the Teacher’s League Center building. They composed the fourth station. Dean Fr. Joel Alve,OAR with his assistant, Ms. Marian Eusoya led  the CAS students.

At the fifth station were the College of Criminal Justice Education students and teachers who assembled by JVS Marketing near the Negros Daily Bulletin building.

Gathering the seventh station were the students of the College of Information and Technology with their Dean, Mr. Elmer Jaro. They assembled along NOHS.

The UNO-R Rams, which is an organization of varsities in the university and the different fraternities in UNO-R, also joined the parade.

The second to the last station was filled with students and faculties of the College of Education, together with Dean Mary Jane Uy. They waited along  Lizares Avenue near the Petron gasoline station.

The High school students and the Grade school pupils, assembled at the ninth station in front of the Lupit Church, completed the parade.

A presentation of Nursing CIs .

The parade ended at the UNO-R Amphitheatre where the University Week was officially open.