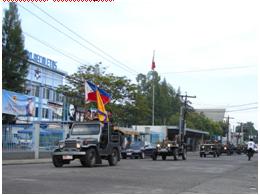 The UNO-Recoletos University Week 2007 opened with a long motorcade last September 4, 2007.  It was followed by a “Floor Dance” participated in by the different Colleges and Departments of the University.

The opening program started with an invocation led by University Chaplain, Fr. Jay Parilla, OAR.  Fr. Joel Alve, OAR, VP-Student Welfare and U-Week Executive Director, gave the opening message and declared the U-Week ’07 opened. Fr. Alve, in his message, stressed the need for everyone to go back to one’s values and reminded everyone that the core values of the University are the essence of the University Week.

Then, it was followed by the performances of the different Colleges and Departments. The emcees of the opening ceremonies were Seraphin Plotria, Jr. and Rhovic Gasangan.

The motorcade along the City Streets of Bacolod.

A showcase of talents in a Floor Dance presented by the different Colleges and Departments in the University.