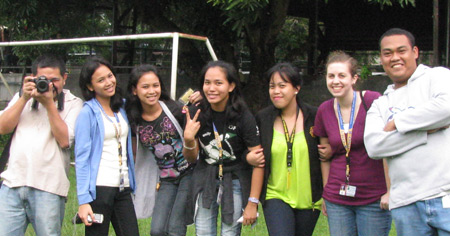 UNO-Recoletos welcomes the arrival of US university student Kathryn D’Anjou who arrives for a university, community and family immersion from January to May 2011.

The 21-year old BA in Global Studies student with minor in youth ministry is graduating on December 2011 at Azusa Pacific University in Southern California, USA.

Because it is all about cultural immersion and learning about another country’s way of life, values, religion, and many more, she said, “I will be living with four families with different lifestyles and expect to learn much from each other.”

After graduation, she also revealed that she plans to work with NGOs or missions “helping people how to fish than just giving them fish opportunities.”

Since her arrival on January 21 she said she had been enjoying talking with people, especially with the UNO-R college students, comparing and contrasting the differences between the Philippines and the US. She had also gone to San Carlos, Murcia and La Carlota and had some sharing with and about the sugar workers. In UNO-R, she took part in Green Heart presentations, explaining about climate change and telling stories to pupils while learning some Ilonggo words from them. Her activity with Greenheart had encouraged the grade school pupils to segregate and collect used paper and plastic bottles in exchange for some school supplies.

The Philippine visit, which is the first time for D’ Anjou, was facilitated by Greenheart Hermitage, through University Property Administrator Bro. Jaazeal Jakosalem, OAR, and World Vision, through Faye Estrada.#msf