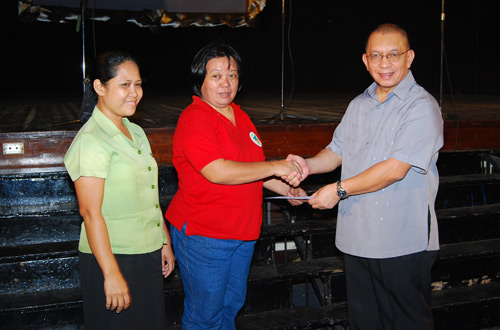 The University of Negros Occidental-Recoletos donated Php 15, 000 to FACES Foundation, an institution that helps cancer survivors, during the Daigon Contest on December 17, 2010 at the university gymnasium. The amount was raised from the contributions of students.

For the past years, the University has been inviting cancer survivors to join in the “Walk of Healing” every September 19 in commemoration of the feast of St. Ezekiel Moreno, Patron Saint of UNO-R and of the Cancer patients. The walk culminates with a “healing Mass”.

Meanwhile, to inculcate the true meaning of Christmas among its stakeholders, the University staged a Daigon contest.  A parade of lights opened the event,which was participated by Physical Education students, representatives of each college and other members of the university community. According to Mrs. Barbara Cordova, chairman of the event,” the parade of lights symbolizes the journey of Mary to Bethlehem”.

There were 11 participating groups with 30 members each. The Students from the Elementary department received Php 7,000 as they ranked first while representatives from the High School department got Php 5,000 for 2nd place and Php 3,000 for 3rd place was awarded to Children of Mary (COM). Consolation prizes were also given. On the other hand, PE students of Mrs. Ma. Joselina Basa from the college of Nursing won the Best Parole Award and received Php 1,500.

It was open to all students, teachers, lay and religious administrators and members of the Rekoleto family.

The contestants did not only showcase their talents but at the same time packaging their presentation with the story of the coming of Jesus Christ.  The contest was sponsored by the UNO-R Administration, UNOFELA, Blue and Gold Alumni Association, Inc., Supreme Student Government, Tolentine Star, and AIDFI.

“DAIGON” is a Karay-a word which means starting a fire or lighting up.