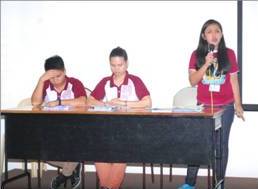 The College of Information Technology and College of Criminal Justice Education won the semifinal round of the intercollegiate debate sponsored by the UNO-R Debate Society headed by Ms. Raxelle Ann Gonzales. The debate was held at the President’s Hall, 15 January 2014. This was the 1st of the series of debates to be contested. The next debate will be on the 22nd. The CIT Debate team is composed of Katrina Dawn Aguilar, Faith Ann Maglantay, and Abby Carillo while the CCJE team is composed of Ma. Tiffany Cabigon, Irish Flores, Jeddan Bryle Esleyer, Mark Ayala and Stephen de la Cruz. The judges were Mr. Dennis Madrigal, Mrs. Mely Flores and Mr. Lino Sumbillo.