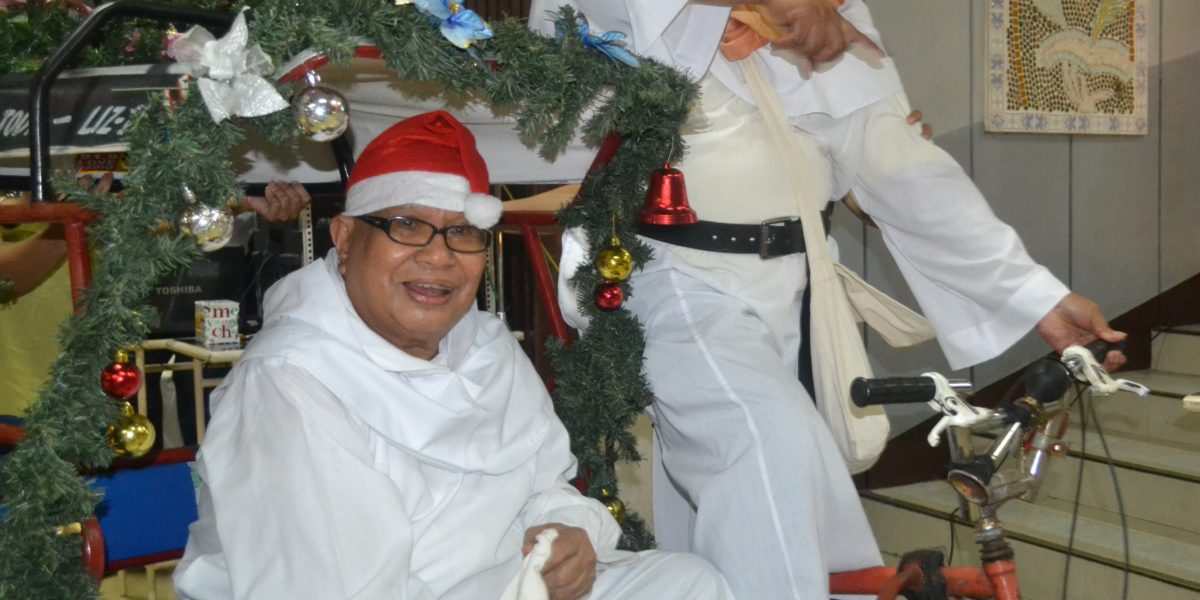 During the Eucharistic celebration before the Institutional Christmas Party last December 21, 2012, Fr. President announced the stand of the university regarding the issue of the day – the RH Law.  In his homily,  he stressed that the university conforms to the stand of the Bishop of Bacolod and the CBCP.   He noted that he has to voice out the stand of the university for silence might be construed as approval of something that is evil.  He strongly said that the law is disgusting and disappointing, especially when the framers said that the law is a gift of Congress, Senate and Malacañang.  He told the congregation that the RH law is against religious and moral principles taught by the Church. Fr. President added that it is sad to note that the government no longer listens to religious leaders but rather to non-religious advisers who have secular interests and principles. RH law is intended to cut the population of the country.  He stressed that RH law makes immoral acts legal.  This is a law against human nature and intends to destroy the family and children.  “As members of the Augustinian Recollects, we are so disappointed and so dismayed at the law for it destroys the dignity of humanity”, Fr. Buñao stressed.   He also related that UNO-R will be converted soon to a home for the aged for there will no longer be any children soon as an effect of the RH law.

He related his experience that in the early 60’s in Spain, there was an incentive for big families.  The Spanish government will give rewards to families with many children.  However,  10 years later, a new law was passed to cut down the population growth.  Productive women were branded as “conejas” (rabbits) as a result women were afraid of the brand. In 2010, when Fr. President visited Spain, his fellow religious noted that in the past, many children were seen in the parks running after the pigeons.  Today, they noted that elderly and old people are seen in the park feeding slowly the pigeons.

Fr. Buñao again said that he and his fellow religious, in union with the bishops in the Philippines, are in total disappointment and total dismay.  “We could not be silent for this will be construed as indifference to the evils of society.  This law kills the children silently and innocently…” , the Fr. President said. “RH Law is contrary to the force of nature and to the will of God, thus, it is unnatural, sinful and immoral.”, he further stressed.

He also related the passage of the bill to the time of the 1st Christmas where Herod slaughtered the innocent children to put an end to the life of the child Jesus.  This was done by Herod because of his insecurities and fear of losing his throne. No one complained or charged Herod for this crime and massacre of the innocent, for he was king. No one was brave enough to charge the King. However,  Herod  went down in history as a coward, a butcher of innocents and a failure to catch up with the child Jesus.  Fr. Buñao likened Herod to the President, the Congressmen and the Senators, who voted for the passage of the RH Bill. They will go down in history like Herod who did not physically murdered children but by principle slaughtered them.

Fr. President reminded the congregation that the Hand of God will always protect us in the same way He protected the life of the child Jesus.  We must have faith that God will protect us and the future generations.   He asked everyone to pray to God for protection especially during the celebration of the year of Faith. We pray that we and our country will not be ruined by this RH Law.