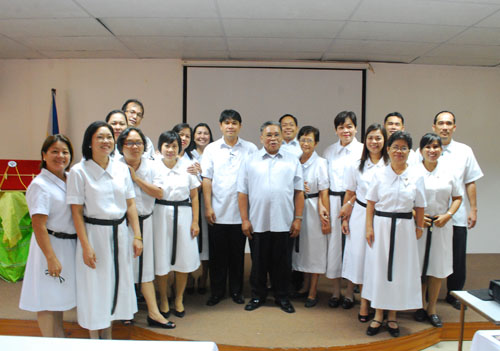 The religious community of UNO-Recoletos headed by Rev. Fr. Emeterio Buñao,OAR commemorated the OAR Foundation day, which traces back to 1588.

Members of the SARF with Fr. Bunao

In a simple but solemn program held at the President’s Hall last 04 December 2010, Rev. Fr. Cornelio Moral, OAR, Asst. prior of OAR Bacolod Community, traced and accounted the humble beginnings of the Order of Augustinian Recollects.  After the talk,  Fr. Buñao led his brother  religious to their renewal of religious vows.

Members of the UNO-R Religious community during their renewal of vows. photo by DJ Sadava

Meanwhile, Rev. Fr.Dionisio Cachero,OAR convened the different committee of UNO-R to a seminar-workshop on ranking at the President’s Hall, 06 December 2010.

Bro. Jaazeal Jakosalem,OAR opened the workshop with an invocation while Fr. Cachero gave the rationale of the activity.  Dr. Rodrigo Ponce and Mrs. Cristina Aliwalas of San Sebastian College – Recoletos (SSC-R), Manila and Mrs. Leonida Africa with Fr. President  were the facilitators during the workshop. They focused on the roles and responsibilities of every member of the community in the ranking process.

The UNO-R Grade School celebrated its Parents’ Day at the University Gymnasium having a short program for all parents of the pupils. Achievers were also recognized.