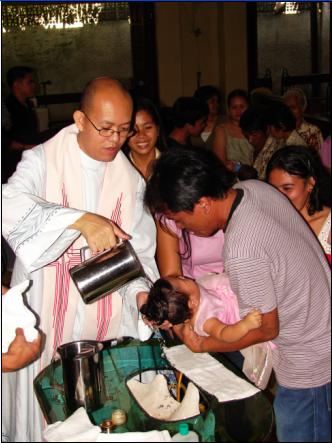 A joint project of the Campus Ministry Office and UCDO was the “Binyagan” which was held last September 5, 2007.
An orientation about the process and meaning of the Sacrament of Baptism was first discussed to all the participants before the formal execution of the sacrament was done.

The celebration started at 10:00 a.m. at the UNO-R Oratory administered by Rev. Fr. Jay Parilla, OAR. Ten babies were baptized coming from the different barangays in Bacolod City. Some faculty members stood as Godparents to the newly christened babies.

The ceremony was co-sponsored by students from the religious education classes.

Six-month old Niña Luminoque of Brgy. 40, Bacolod City was one of the baptismal candidates at the annual "Binyagan" program of the Campus Ministry Office of UNO-R Bacolod.  The baptismal ceremony was officiated by UNO-R Bacolod Chaplain Rev. Fr. Jay M. Parilla, OAR.