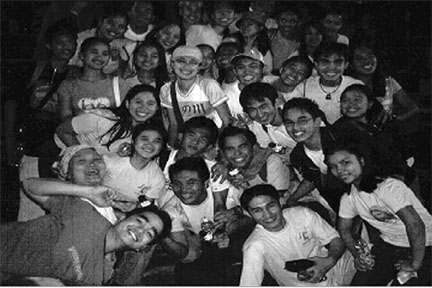 The 2nd Youth camp ran smoothly with all the things set in place.  21 vocations promoters from different Religious Congregations of the Dioceses of Bacolod, Dumaguete and San Carlos joined their hands to make the event a success.

The jamboree was held at the UNO-Recoletos Amphitheater last February 10 and 11.  It opened at 5 pm and ended with a 4 am Eucharistic celebration. The participants numbered over a thousand.

Bro. Bo Sanchez of Kerygma was the guest speaker. He talked about the requirements for following Christ.  The participants were mesmerized by the talk of Sanchez. He stressed that there are three requirements: leave stuffs behind, offer your gifts, and obey your Master.  One has to follow this and has to listen carefully to the message of the Lord.

After the talk, the participants were given time to share on the topic. Adoration, Confession and Benediction were to set the mood for the early morning Mass.  Unlike the first camp, silence and encounter with the promoters were given emphasis.

According to one participant, the activity has really helped him in making up his decision.  He said that this was the first step for him to answer God’s call.

With all the hands pulled together, everything went so smoothly.  According to one of the organizers, God’s Providence was really at work and donations came pouring in.

The committees that made the camp a success were Society of St. Columban and Order of Augustinian Recollects – secretariat;  Order of St. Augustine – finance,  Daughters of St. Paul and the UNO-R Mass Communication Department– publicity/promotions;  Carmelite Missionaries and La Salle Sisters of Guadalupe – program;  UNO-R Campus Ministry and Salesian Sisters of Don Bosco – liturgy;  Marian Missionaries of the Holy Cross, Sisters of the Most Holy Trinity and the Order of Augustinian Recollects – registration;  Sisters of the Rural Missions and Capuchin Tertiary Sisters – exhibits; Daughters of Charity of St. Vincent de Paul – evaluation and UNO-R Student Catholic Action of the Philippines and Children of Mary – animations.

Other participating congregations are Congregation of the Most Holy Redeemer, Augustinian Recollect Sisters, Conceptionist Missionary Sisters, Missionary Catechists of St. Therese of the infant Jesus, and Sisters of the Good Samaritan.

The vocation camp is an annual activity to promote more vocations for religious life.  This was conceptualized by Fr. Antonio Limchaypo, OAR, Fr. Max Francesco, MMHC and Sr. Ting Malacad,OSA in 2006.