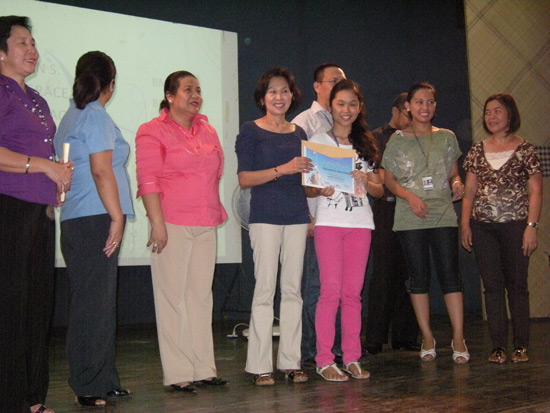 “Every UNO-Rian is expected to have a passion for excellence in everything . . . the driving force that would make all our endeavors achieve its perfection.”

VP-Academics Fr. Joel Alve, OAR, underscored the importance of transforming the UNO-Rian core value of passion for excellence into action as he congratulated the students and their parents, and also the faculty of College of Arts and Sciences for actualizing excellence.

Fr. Alve was the inspirational speaker during the CAS Honors Convocation. Together with CAS Dean Nieves Hibaler-Pepito and department heads, he conferred on the 235 outstanding students   – 12 gold, 105 silver and 118 bronze awards – for their sterling academic performances during the First Semester of AY 2010-2011 on November 19 at UNO-R Auditorium.

Dean Pepito confirmed Fr. Alve’s pronouncement about the achievers.  In her welcome address, she revealed the “remarkable increase” of 66% in the number of awardees, from 79, with 3-gold, 42-silver and 34-bronze awardees, in the last convocation on October 9. Hence when she pressed them to loudly express their conviction for earning such achievement, the awardees easily cheered “Soar High Artians!” amid the applause of their parents, teachers, classmates and friends.

The VP-Academics also acknowledged the overall efforts of CAS towards excellence. He cited that aside from its being the first college to achieve PAASCU Accreditation, its students and faculty members had proven themselves by also reaping local, national and international recognitions.

He thanked the parents “for believing in the Rekoleto way of education," and told the honor students to “go to your parents and hug them, thank them for their support, sacrifices and encouragement.”

The special event also became an occasion for CAS to launch the student organizations and to hold the Parents’ Assembly, wherein CAS Parents’ Association President Rod Jamora presented his report and planned projects in support to the college’s efforts to promote academic excellence./msf