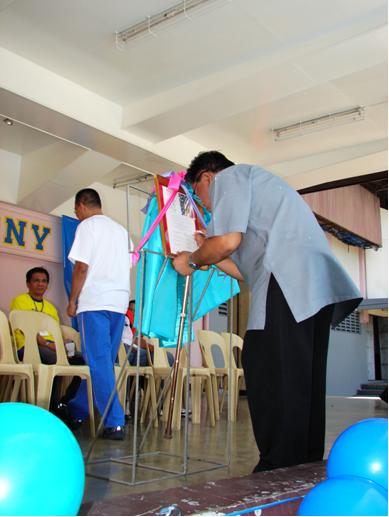 The launching of English Speaking Campaign was successfully made last September 4, 2007 at the Amphitheatre with the support from our Vice President for Academics, Rev. Fr. Raul Buhay, OAR; in behalf of the College Deans, Mr. Elmer T. Haro; Director of Libraries, Mrs. Arabella M. Ananoria; and the UNORSSGO President, Mr. Ivan Roger Bullos.

The dean of the College of Arts and Sciences (left) and Ms. Joy Gallos (right) in the Launching of the English Speaking Campaign.

In the first day of launching, different activities were done at different English Speaking Campaign zones such as poetry reading, story telling, debate, political forum, impromptu and extemporaneous speaking. These activities were still going on the following days. The whole week of launching needed full support and cooperation of all the students with English subjects.

The READS President in behalf of his fellow READS gave support in the Campaign launched.

The University Deans also joined the Launching in the person of Mr. Elmer Haro, Dean of IT.