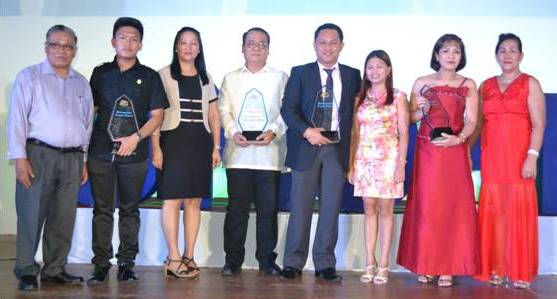 The Blue and Gold Alumni Association, Inc. and the host class ’73 (Ruby Jubilarians) recognized 4 outstanding Alumni Achievers last September 28 at the L’Fisher Hotel. Governor Alfredo Maranon, Jr. was also given Certificate of Recognition for his unselfish dedication and service to the people of Negros Occidental.

The first awardee is Ma. Teresa Arroyo – Limsiaco, BSN, RN, CPAN. She finished her basic education (Grade School and High School) from the University. Groomed by the philosophy of providing tender loving care to the sick, she pursued her vocation as a nurse and practiced her profession for 35 years, 24 years of which were spent at the Memorial Hermann Hospital, the Woodlands (MHHTW) Texas, USA. She has served the Philippines as a Nurse from 1978 to 1980. From 1980 till today, she has held different assignments and positions in American hospitals. For the last 4 years, our awardee holds the position as Clinical Manager of Preop/ PACU and the ERU of the said hospital. Limsiaco is also an active volunteer in civic organizations like Habitat for Humanity and the Woodlands Community Center (a clinic that serves the underprivileged for medical and dental check-ups). She is also active in the St. Anthony de Padua Catholic Church. She had also served for the past three years in the medical unit of the Ironman Triathlon of Texas As nurse, she is a member of the American Society of Peri-anesthesia Nurses (ASPAN) and the Texas Association of Peri-anesthesia Nurses (TAPAN). She had also received several citations in relation to her profession. She is married to Dr. Marciano Salvio Limsiaco and the daughter of Engr. Lawney Arroyo, Sr. and Naida Lopez – Arroyo.

The next awardee is Dr. Roy Basa. He finished his undergraduate, graduate and post graduate studies from UNO-Recoletos. He entered the university after finishing his secondary education from La Consolacion Academy in Murcia, Negros Occidental. He finished his degree in Doctor of Philosophy in Educational Management with high academic distinction and Outstanding Dissertation award in 2012.

He now works as a full-time  instructor in Negros Occidental High School Night Class Department.  He teaches ,in his words, the “timbangs and mga boys”(household helpers) but he sees them as deserving of quality education also.  Guided by the mission of helping the “kasambahays”, our awardee chose to be with them than the regular students. He is a faculty of UNO-Recoletos and is also the Student –Teacher Supervisor of the UNO-R College of Education.  He is also part-time faculty of the Recoletos de Bacolod Graduate School.  Prior to his present employment, he had been teaching in many educational institutions in Negros.

The next awardee is Dr. Raul Alvarez, CESO.  He completed his Doctor of Education Major in Educational Management and continued to widen his specialization by completing numerous trainings and seminars conducted by CHED. TESDA, AUSAID and other sponsoring organizations in the field of education and training.  In his 21  years with higher education, he finds the goal of educating the youth in meeting the challenges of the times as a very challenging task. As a Career Executive Service Eligible who possesses the energy, youth, and competence, he took oath as Acting Director IV of the Commission on Higher Education Regional Office XI last July 2, 2012 and took over its leadership last July 30, 2012.

And the 4th awardee is ABS-CBN’s Harold Limbo.  A graduate of Bachelor of Science in Mass Communications at UNO-R in 1983, he has worked for News at Seven of GMA Magnitude 10 as News writer and Technical Director; as News writer for Firestone hourly news for MGK 103 FM of Westwind Broadcasting Corporation; as News writer and Anchorman for DYEZ AM of Manila Broadcasting Corporation. All his media exposures prepared him for the greater task he held when he joined the ABS-CBN Broadcasting Corporation ac Anchor, Reporter. Cameraman of the top rated TV Patrol 4, Winner of the KBP Golden Dove Award for Best Provincial TV Newscast and Hoy Gising, also a winner of the KBP Golden Dove Award for Best Provincial Public Service Program. His media career soared high as he continually became producer of top-rating shows of ABS-CBN while at the same time serving the Standards Authority for TV of the KBP Negros Occidental Chapter.

The Alumni homecoming ended with the presentation of La Castellana’s Bailes de Luces and ballroom dancing of the alumni participants.