Logo for the 2020 pastoral directive 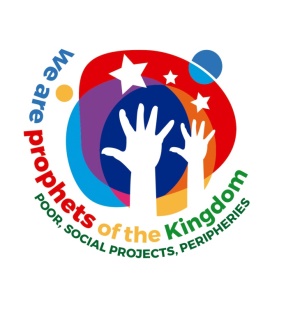 The Augustinian Recollects present the visual image that represents the guideline for this year: “We are prophets of the Kingdom: poor, social projects and peripheries”.

The pastoral directive for the year 2020 has an image that represents it. The Order of Augustinian Recollects presents the logo that symbolizes the motto proposed for these months: “We are prophets of the Kingdom: poor, social projects and peripheries”. The image is in the three languages of the Order and is meant to be the graphic representation of the pastoral priority proposed by the Prior General.

The symbolism of the logo

The logo has been designed by the Augustinian Recollect Rafael Nieto and will be present in digital and physical support on the web, social networks or documents, among others. The objective is to recall the prophetic and missionary vocation of the Augustinian Recollects; the proclamation of the Gospel and its realization in the person of the most vulnerable is a task that, as prophets, must be done by religious, laity and young people who live the Augustinian Recollect charism. The image has three elements, each one with its concrete meaning. The hands represent prophecy; raised hands that denounce and announce, that help and commit. The stars symbolize the Kingdom of God, the goal towards which the efforts marked by the prophetic hands are directed. And, finally, the diversity of colors reflects the diversity of the world, the peripheries, the different types of poverty, the variety of ideas, of criteria… and in that varied world there are also the Augustinian Recollects.

The poor, the social projects and the peripheries are the great axes of the apostolate of the Order of Augustinian Recollects for this year. All sections of the Augustinian Recollect apostolate will carry out their pastoral, social and educational activities during these months following the guideline set by the General Curia for 2020: “We are prophets of the Kingdom: poor, social projects, peripheries”. The purpose of 2020 focuses its attention on the most needy and the poor, following the line of Pope Francis. The objective is to make known, from the different ministries, the social work carried out by the Augustinian Recollects, to mark the poor as a priority and to reinforce the value of justice in solidarity. Faced with the challenge of social exclusion, injustice and the proliferation of a culture of death, the Order of Augustinian Recollects is committed to mercy, the public defense of denied values, the option for the excluded and the esteem of interculturality. This image is compatible with the images and slogans that have already been used for months in the educational apostolate or youth and vocation ministry, which have been adapted to their specific contexts. Both will coexist during this period. (https://www.agustinosrecoletos.com/2020/01/logo-directriz-pastoral-2020/?lang=en