Rev. Fr. Emeterio Buñao, OAR, the 15th President of UNO-Recoletos, met with all the lay administrators at the President’s Hall, May 21 at 3:30 PM.  He called them to thank them of their commitment and services to the university and his administration.  He, in behalf of his administration,   also bid them farewell as they end their assignment at UNO-R.  Fr. President presented his 5-point accomplishment  report.  First, on his mandate to revitalize the university by bringing back the catholic identity,  the Fr. President said that this task was concretize by the programs of the late Fr. Cornelio Moral, OAR,  Fr. Abraham Latoza, OAR and the REED and CMO.  He also commended other members of the community for working hard to make UNO-R, a catholic community.  Second, He made a commitment that he will not rock the boat or make so much noise, so he rode on the 10 –point agenda of his predecessor, Fr. Dionisio  Cachero, OAR.   Third, in academics, his administration created the office of Quality Assurance and enhanced the research capability of the university.  These two boosted the morale of the university to seek for higher achievements.  Fourth, he boasted of the existence of industrial peace that brought the university to excellence and success.  And lastly, the three years was a preparation for CHED – Autonomous Institution; PAASCU Accreditations; Senior High School offering.  Fr. Buñao also shared to the lay administrators his secret.  He told them that he would pray to his predecessors to help him in the endeavors of the university.  He prays to Fr. Terradillos for solutions and to Fr. Modequillo for his arthritis.  Fr. President, in behalf of his administration,gave thank you cards with tokens of appreciation to the lay administrators.  The Administrators also gave the Fr. President a token of appreciation.  Socials followed after the program. 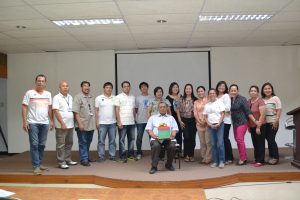