The 6th Chapter of the Province of St. Ezekiel Moreno, which started in Cebu last February 17th, has elected a new prior provincial in the person of Fray Dionisio Selma. He was the person most voted by the religious of the Province. During the last triennium, Fray Selma was the Vicar of the Province and President of the Secretariat of Spirituality.Fray Dionisio Selma was born 55 years ago in Minglanilla, one of the municipalities that compose Metro Cebu, the second largest city of the Philippines, and the center (capital) of the Visayan region. After finishing the elementary studies, and at 17 years of age, he went on to high school at the Immaculate Heart of Mary Academy which the Augustinian Recollect Sisters have in Minglanilla.

Formed in the Philippines, Spain and Rome

He left his family circle at the end of four years, when he decided to enter the seminary which the Augustinian Recollects have in Baguio City, in the north of the country. There with the program of an intern, he finished three years of philosophy and one of the novitiate. And in the same house, he professed his first religious vows in the 5th of July of 1981.

At that time the province of St. Ezekiel Moreno did not exist yet, and so theological studies had to be taken in Spain, at the theology house of Marcilla (Navarra). There he studied four years of theology (1981-1985). He made his solemn profession there on October 20, 1984. And there he was ordained priest in September 9 of the following year. Then, he was sent to Rome where he obtained his licentiate in Dogmatic Theology at the Gregorian Pontifical University.

Fray Selma is a formator. He dedicated his fist ten years as a priest to the formation of candidates, one time as directly in-charge of young aspirants, at another as rector of the community, at the theologate in Quezon City as well as in the novitiate of Antipolo. To this novitiate house he returned during these last three years, as prior of the community, at the same time serving in the post of Vicar of the Province and President of the Secretariat of Spirituality.

But this new Provincial is, above all, a professor. During his whole sacerdotal life, he has practically not left teaching one or another subject in the field of Dogmatic Theology in which he is an expert. At the Recoletos Formation Center to which religious formands form other Orders come, besides those of the Philippine Province, he began his journey in 1985. With a few gaps, Fray Selma has been a professor there since 1987.

Without doubt, these preceding experiences of being a formator and professor will be for him highly valuable, from now on, for this new task of guiding the Province of St. Ezekiel Moreno through the paths of revitalization and the return to the origins.(http://recoletosfilipinas.org) 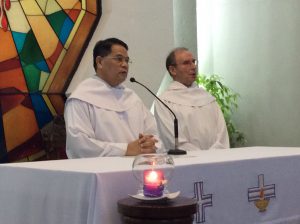 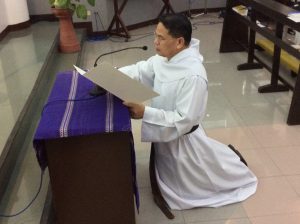