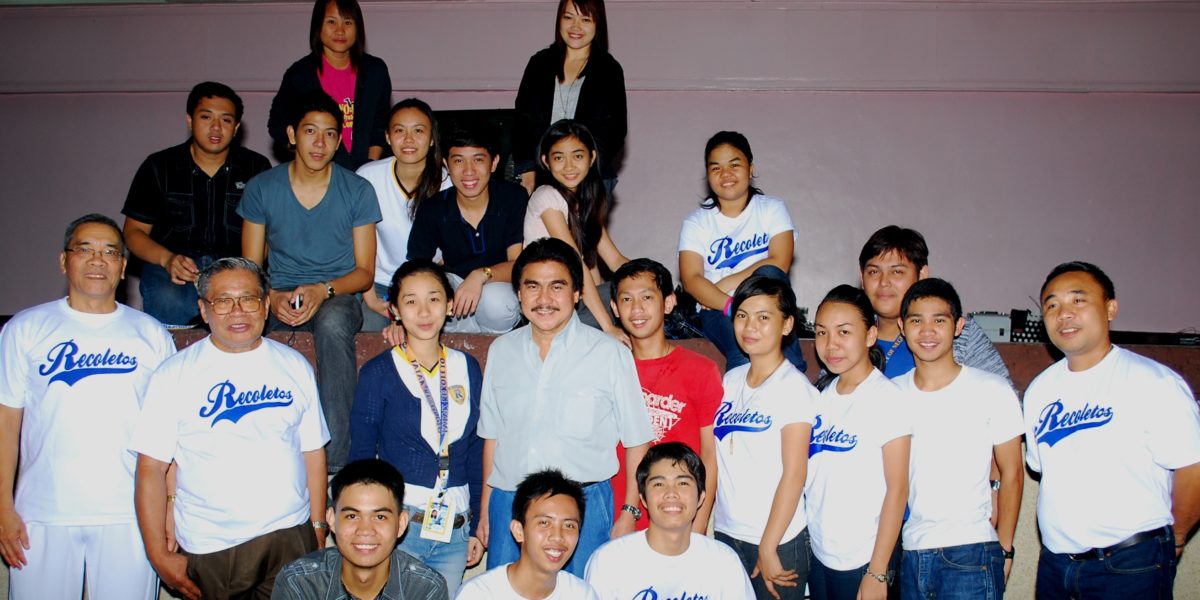 The university celebrates the  3rd Freshmen Assembly Night (FAN) with the theme: “True Unorian” at  the University gymnasium from 4 pm to 5 am last June 29 – 30.  This is an overnight activity for the Freshmen students.  It is a unique type gathering where Recoleto branding or the “Tatak Recoleto” was imposed upon every freshmen of UNO-R.  Similar activities were also done in other Recollect schools like San Sebastian College-Manila; SSC-R- Cavite; USJR, Cebu.   Registration, which was manned by the Registrar’s Office staff, started at 4 pm. Program proper commenced at exactly 5:30 with a parade to the Amphitheater, where faculty and administration imposed a cross necklace upon the freshmen and transfer students, a tradition which was started last year.   Introduction of the school administrators and the community to the Freshmen followed the opening salvo by the Kasadyahan Dance Company.   Atty.  Mercedes Odango- Saril gave an inspirational message to the freshmen while Rev. Fr. Cornelio Moral, OAR, FAN Chairperson, discussed the Philosophy-Vision-Mission of the university.  Rev. Fr. Jorge Peligro,OAR, VP-Academics was the  Main Celebrant during the Concelebrated Mass at 8:50 PM.  Rev. Fr. Emeterio Buñao,OAR , University President,  talked on Recoleto Spirituality .  Induction of SSG Officers followed after the Taize Prayer at 12 midnight.  Fr. Louie Gabinete,OAR , VP-Student Welfare, discussed the “Characteristics of a UNO-Rian” at 1 am.  Search for Mr. and Ms. Freshmen 2012-2013 was held at 3 am – 4:15 a.m.  and  Bro. Jaazeal “Tagoy” Jakosalem,OAR talked on Environmental Consciousness while Fr. Moral  recapped the whole event at 5 am.

Bacolod City Mayor Evelio Leonardia, who belongs to Law class ’79 and was the SAO president in 1978,  surprised the freshmen when he came in at 11:30 pm and talked to the students.  He told them that he launched his political career at UNO-R.  As a token, he was presented with a copy of the 1979 Blue and Gold Yearbook.

Fr. Moral and Fr. President hand the token to the Mayor while Mr. Fritz Palma facilitates a group sharing session during the Freshmen Assembly Night.