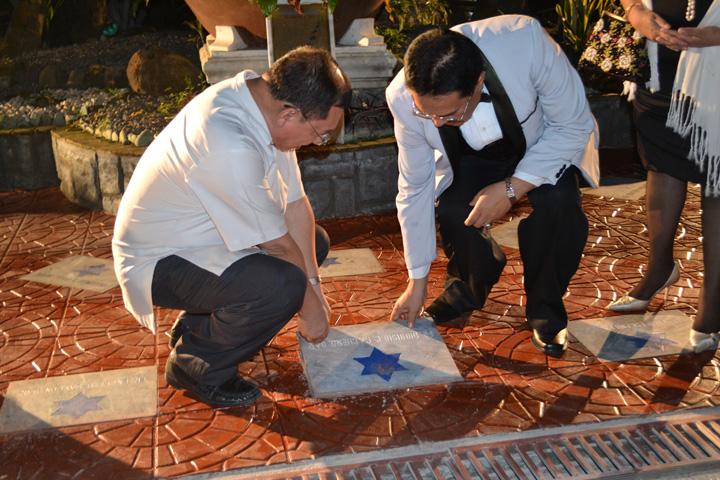 The University of Negros Occidental re-launched the Recoletos de Bacolod Walk last September 21, 2011 at the UNO-R Main Lobby at 7 pm. The project was conceptualized in 2007 by Rev. Fr. Demetrio Peñascoza, OAR; Mrs. Connie Po, CPA, MBA; AND Mr. Antonio Gargarita, MBA, Ll.B. This is the UNO-R version of the Hollywood “Walk of Fame”. The unique feature of the project is that a part from the generated income will help finance the scholarship of a deserving student of UNO-Recoletos.

On the feast of the Assumption of the Blessed Mother in 2007, The Executive Committee, then headed by Fr. Peñascoza,OAR, laid the first slabs of marbles with the names, carved under the Tolentine star, of generous benefactors and friends of the university. The Honorable Governor Joseph Marañon, represented by his sister and Mayor Evelio Leonardia were present to lay their own marble slabs.

Presently, with Fr. Dionisio Cachero,OAR and the UNO-R School Board, the 2011 version of the Walk of Fame was launched. A motorcade around the thoroughfares of the city was done in the morning.

The highlight of the program was the MOA signing between the university and Mr. Benjamin Lopue, Jr. and his family. The family donated and agreed to develop one classroom in the Our Lady of Consolation Hall. Mr. Lopue is the first benefactor in the adopt-a-classroom project of the university.

Earlier in the afternoon, Bingo socials were also done by Mr. Cedric Yambot, the student coordinator of the “Walk of Fame” project. Its aim is to generate funds to finance further the project.

Those interested to have their names immortalized at the grounds of the university may contact Mrs. Connie Po at 4332449 loc 194 or Mr. Carlos Legaspi, Jr. at 4332449 loc 114. One may also send queries to unorpro@yahoo.com or visit uno-r walk of fame at facebook.

In photo:  Fr. President and Mr. Gargarita lays the “Walk of Fame” marble slab at the University Park.