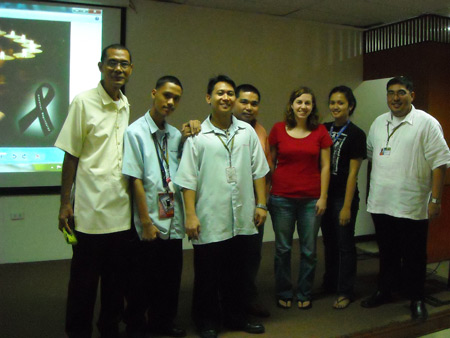 For the past 4 months, the UNO-Recoletos community commemorate the biggest Media massacre in the country.  To commemorate the 1 year and 2 month anniversary of the massacre, a symposium was held the President’s Hall of UNO-R at 2:30 last January 24, 2011. The symposium was followed by a candle lighting ceremony at the Paseo Rekoleto.

Peace Flores and Donson John Sadava, convenors of the event, was glad to see that their fellow students from the College of Education were present during the affair.  Sadava said that he is overwhelmed at the positive response f his fellow students to issues like this while Flores hoped that many more students from other colleges will develop concern over issues that affect the youth today.

The invited speaker was Mr. Fernando Flores, Philosophy Professor. He talked about the history of massacres in the Philippines. He started his talk on reminiscing the Balangiga Massacre done by US troops and ended with the most inhuman Maguindanao Massacre. He asked the participants to be vigilant on the event that are unfolding today.

Bro, Jaazeal Jakosalem, OAR closed the affair by inviting the participants to reflect and act on the issues at hand.  He told them that we should pursue a broader call for justice; abolish militia –backed governance (politicians); and end the legacy of kiliings.

The activity ended with a Eucharistic celebration at the Oratory of St. Nicholas of Tolentino and a candle lighting ceremony at the Paseo Rekoleto.