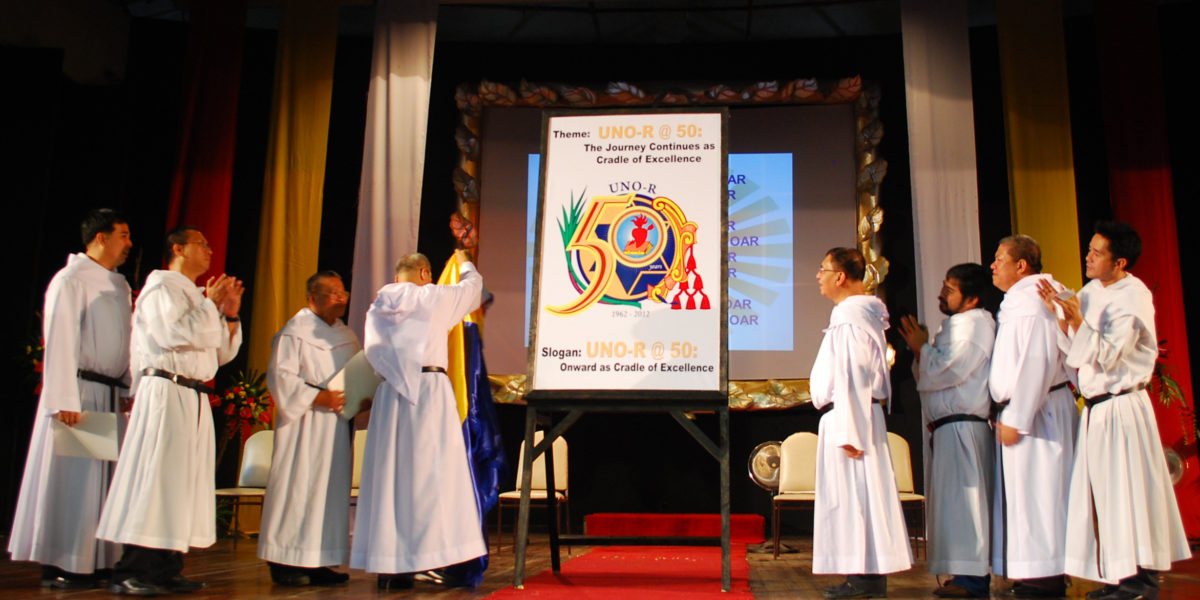 University of Negros Occidental – Recoletos launched the celebration  of the Recoletos  Education Year of its 50th year as a Recoletos academic institution after the Mass of the Holy Spirit last June 24, 2011 at the university Gymnasium.  .  In a simple yet solemn ceremony, the Recoletos Education Year was launched at UNO-R.  OAR Provincial Councilor and Bacolod House Prior Rev. Fr. Emeterio Buñao,OAR formally opened the celebration of the OAR Recoletos Education Year at UNO-R.  Meanwhile, Rev. Fr. Dionisio C. Cachero,OAR , University President, read the Resolution  of the School Board  and officially opened the event. Also, statements of support were given by the Alumni represented by HS class ’63; UNOFELA represented by Mrs. Cathy Sebastian and the students re[presented by UNOSSGO President Junnel Lupo

The School Board Resolution states that as the Order of Augustinian Recollects celebrates its 406th presence in the Philippines and in Asia and its 390th  years of having planted the seed of evangelization in the island of Negros and its 164th  year of formally accepting Negros to be its mission island.  UNO-R also celebrates its 65th year as an academic institution and its 50th year as a Recollect academic institution.

The Order of Augustinian Recollects (OAR) started their mission in the Philippines in 1606, when a group of missionaries of the Augustinian Recollection came to the shores of the Philippines. They continued the evangelization of the islands and established mission territories.  In 1622, the missionaries planted the seed of evangelization in the island of Negros but were formally commissioned in 1848  to have spiritual jurisdiction over the island. Today, the OAR administers 4 parishes and 5 academic institutions and a minor seminary in the Negros Island.

A year-long program of activities are lined up to highlight the celebration of 5 decades of Recoletos Education at UNO-R.  The theme of the celebration is “UNO-R @ 50: The Journey Continues as a Cradle of Excellence.”  Rev. Fr. Cornelio Moral,OAR heads the Executive committee of UNO-R@50.