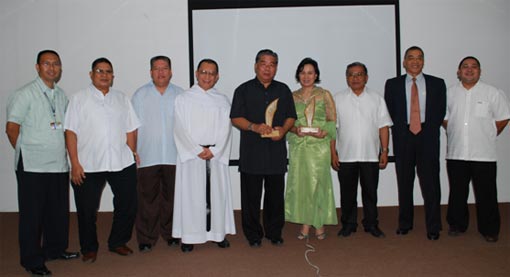 Consultant of the Recoletos de Bacolod Graduate School, Dr. Maria Dolores V. Ramos, is one of the ANG BANWAHANON AWARDEES for 2009. This search is sponsored by the City Government of Bacolod.  Dr. Ramos joined other awardees during the Awarding Ceremony on the 71st Charter Anniversary of Bacolod last October 19, 2009 at the New Government Center.

Dr. Jose Ferraris and Ms. Marian Eusoya with the member of the UNO-R School Board headed by Rev. Fr. Dionisio Cachero,OAR.

Meanwhile,  The UNO-R School Board paid tribute to Dr. Jose B. Ferraris, former SDPC Director, and Mrs. Marian Eusoya, Medtech Head who is a national awardee in the 2009 The Many Faces of the Teacher sponsored by the Bato Balani Foundation and the Diwa Foundation, Inc. The tribute was held in the evening of October 15, 2009 at the President’s Hall.

Fr. Cornelio Moral. OAR, Vice President for Religious Affairs, led the Homage to God while University President, Fr. Dionisio Cachero, OAR, gave the Welcome Address. During the tribute to Mrs. Eusoya, Fr. Joel Alve, OAR, Vice President for Academics, gave a message as a former superior to Mrs. Eusoya at the College of Arts and Sciences. Message also came from Mr. Robert John Lamis, a faculty member of the Medtech Department. The Medtech faculty, led by Mr. Tony Valiente, serenaded Mrs. Eusoya with a beautiful rendition of “I Will be There”. The honoree then gave a highly emotional response and thanked the Administration for the recognition accorded her that night.

Meanwhile, the tribute to Dr. Ferraris started with a message from Fr. Emeterio Buñao, OAR UNO-R Prior. The message from Mrs. Loreto Portus, former faculty of Cr. Ferraris at the Teacher’s College, recalled her pleasant experiences with Dr. Ferraris. UCCPD Head also former faculty at the Teacher’s College, Dr. Nena Samillano, offered a song number and led the other faculty into another musical tribute. Dr. Ferraris then expressed his gratitude to the Administration ad well as his regrets to have severed his tie with the University because of his illness. The program ended with a Closing Remarks from Fr. Sixto M. Bitangjol, OAR.