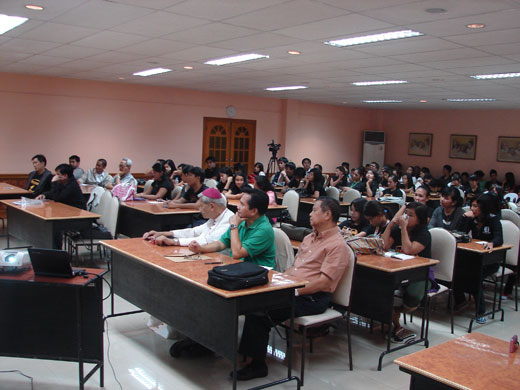 The University of Negros Occidental-Recoletos played host to the 1st Bishop-Media Forum held in the afternoon of June 27 at the President’s Hall. The forum, which anchored on the theme, “How will Media cover the 2010 Elections?”, was sponsored by the Diocese of Bacolod Commission on Social Communication with the Mass Communication students of Bro. Jaazeal Jakosalem, OAR comprising the different working committees.

Bro. Jakosalem formally opened the forum with an Invocation. Welcome Message came from Fr. Felix Pasquin, Chairman of the Diocesan Commission on Social Communication. Bishop of Bacolod, Most Rev. Vicente Navarra, D.D., in his Inspirational Message stressed that everyone is a stakeholder in the forthcoming 2010 elections because the outcome of the said elections will affect everyone in this country. Thus, he added that it is everyone’s responsibility to ensure an honest, clean, and devoid of violence type of election. He called on the media to play its role of instilling hope to the people through a bright light of reform and transformation.

Negros Historian and member of the Diocesan Commission on Social Communication, Mr. Modesto Sa-onoy, gave an orientation of the process of the forum. Ms. Leilani Salem-Alba, station manager of ABS-CBN TV 4 in Bacolod, then discussed ABS-CBN’s plan of attack in covering the 2010 Elections specifically naming “Boto Mo Patrol Mo, Ako ang Simula” as the industry’s strategy of empowering the voters through the use of technology to fight electoral fraud and to put moral pressures on those who cheat during the election.

On the other hand, Julius Mariveles of Aksyon Radyo, assured the audience of fast, accurate, and reliable type of reportage during the 2010 elections. He named “Sentro Pulitika”, “Public Agenda”, and Oplan Mercury” as the station’s response to the question, “How will media cover the 2010 Elections?”. Eljun Castaño, also from the radio broadcasting industry, said that his station, DYHB is launching on air “Bantay Balota” and “Pulitika Ngayon” to achieve systematic, comprehensive, first, fast, and factual reporting of the 2010 Elections. He added that DYHB would be tapping student volunteers to help them in their advocacy.

Meanwhile, a message from Ninfa Leonardia, Editor-in-Chief of the Visayan Daily Star, was read by Mr. Rufus Javier, Head of the UNO-R English and Mass Communication Department. The message focused on “The Critical Importance of Election in a Democracy” and emphasized that media should focus on issues rather than personalities.

Reactors were invited from the Commission on Election, the clergy, and the academe. Atty. Jessie Suarez, COMELEC Provincial Supervisor, assured everyone of a clean and honest election and called on the media to police their ranks while referring to those who indulge in the improper use of their profession. From the clergy, Fr. Jesmar Manato, Rector of the Sacred Heart Seminary, espoused the partnership of the church and the media in safeguarding the interest of the Filipino people. Speaking in behalf of the academe was Dr. Evangeline Aboyo, Director of the UNO-R Community Development Office. She shared a very sad experience about how media has distorted information and how it has misled the public. She then posed a challenge the media to do its role conscientiously.

An open forum followed with Mr. Sa-onoy as moderator. The forum ended after a synthesis of the major points by Judy Legaspi of the UNO-R President’s Office and the closing remarks from Ernest Latiza, Head of the USLS Mass Communication Department.