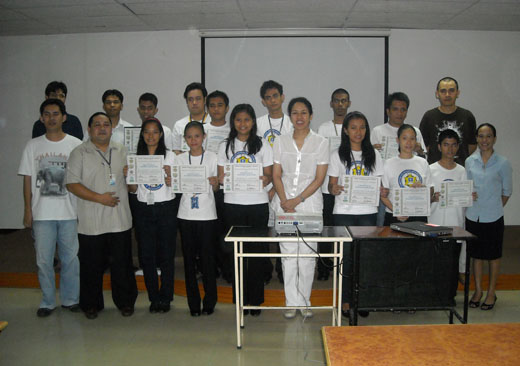 Twelve students from Welcome Home Foundation, Inc. (WHFI) have completed the Computer for Hearing Impaired program (CHIP) of UNO-R under the College of Information Technology. In this connection, a Closing Program was held last April 13, at 3:00 PM at the President’s Hall.

Fr. Bitangjol and Mrs. Jalandoni with the graduates of the UNO-R CHIP.

After the Closing Program, UNO-R signed a Memorandum of Understanding (MOU) with WHFI for its BLesD (Baking Lesson for the Deaf) Program which runs from April 13 to April 25, 2009 under the College of Business and Accountancy. Dean of College of Business and Accountancy, Dr. John Clifford Salugsugan, gave the rationale of MOU. Fr. Bitangjol  signed in behalf of UNO-R while Mrs. Jalandoni, in behalf of WHFI. Response came from Mrs. Jalandoni while Closing Remarks from Fr. Emeterio Bunao,OAR culminated the program.