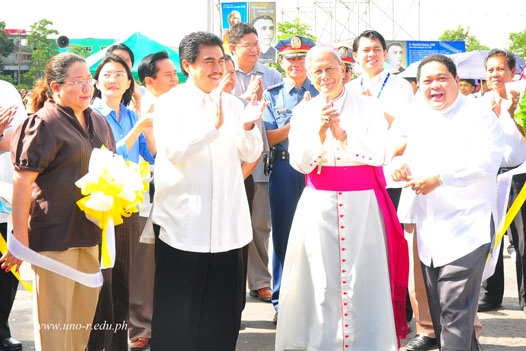 The City of Bacolod, in cooperation with the Diocese of Bacolod, the University of Negros Occidental-Recoletos, and the OAR Province of St. Ezekiel Moreno, inaugurated the Fr. Mauricio Ferrero, OAR Street along the Manokan Country on January 19, 2009.

The Glee Club of the Grade School Department led the singing of the Philippine National Anthem.  Hon. Jocelle Batapa-Sigue, sponsor of the ordinance naming the street after a Recoleto, read the approved ordinance before Bishop of Bacolod, Most. Rev. Vicente Navarra, D.D. blessed the historical marker unveiled by Mayor Evelio Leonardia in the presence of the members of the Sangguniang Panlungsod and the Recollect Fathers.  The street was formally inaugurated through a ribbon-cutting ceremony officiated by Bishop Navarra, Mayor Leonardia, Fr. Sixto Bitangjol, OAR, and Fr. Emeterio Buñao, OAR.  Dance numbers were then presented by the KDC and by the Physical Education students of UNO-R.

The second part of the program was held at the Events Center of SM City.  Fr. Felix Pasquin, Rector of the San Sebastian Cathedral, gave the Opening Remarks.  Prof. Emmanuel Luis Romanillos made some historical notes.  Bacolod Mayor Evelio Leonardia then delivered his message and responses were made by Bishop Navarra, Fr. Lauro Larlar, OAR whose message was read by Fr. Bitangjol, and Ms. Marites Lamier, President of the Manokan Country.  Closing remarks were given by Prof. Modesto Saonoy.  The whole inauguration was witnessed by the administrators, faculty, staff, and students of UNO-R