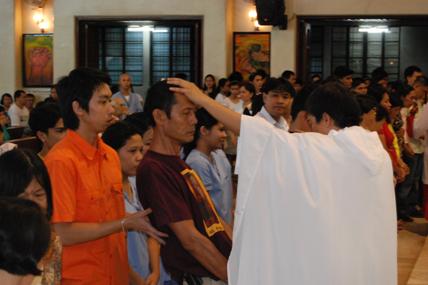 August 19, 2008 is the 101st death anniversary of St. Ezekiel Moreno,OAR.  St. Ezekiel is a missionary who has lived a part of his life at the Convento de Rekoleto at Talisay City.  He stayed under the medical care of the famous Recollect missionary, Padre Fernando Cuenca. St. Ezekiel was later assigned as Bishop of Pasto, Colombia, where he was afflicted by cancer and later succumbed to it in August 19, 1907. Soon, Pope John Paul II declared him as Protector Saint of Cancer patients.

Fr. Hernando healing the faithful during the healing mass at the oratory of St. Nicholas of  Tolentino, UNO-R

UNO-R celebrated the feast of the patron of the OAR Province of St. Ezekiel.  It started with a walk for healing from the capitol lagoon to the Oratory of St. Nicholas of Tolentino. The walk was joined by Religious and lay Administrators, faculty and staff, and students of UNO-R. USLS and other schools in the city also sent representatives to the walk for healing. The walk was expected to generate funds to be given to the poor cancer patients.

A healing mass followed. Fr. Fernando Hernando was the main celebrant together with 6 other Recollect priests.  He stressed in his homily that spiritual welfare should be the focus of Christian life and that material or physical welfare is only secondary. One should focus his life on Christ.

A healing session followed after the Eucharistic celebration.