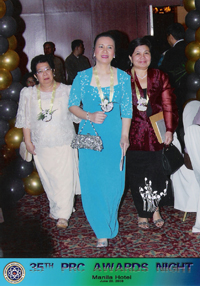 Eusoya is also the newly appointed NOPSSCEA Commissioner on Tertiary Level for S.Y. 2008-2010. She is an administrator, professor, laboratory owner, a licensed Medical Technologist and a certified International Medical Technologist by the Board of Registry of the American Society for Clinical Pathology.

Eusoya is a recipient of various notable citations. 2008 Most Outstanding Teacher (Tertiary Level) from NOPSSCEA, the National “Distinguished Award” from the Philippine Association of Medical Technologist, Inc. (PAMET), Achiever’s Award in the Field of Medical Technology from the Blue and Gold Alumni Association of ONI, UNO and UNO-R and the International Training Award in the field of clinical laboratory technology from the Japan International Medical Technology Educational Foundation (JIMTEF), Nara Japan are the citations received.

Another alumnus of UNO-R High School Batch 1969 who received also this very prestigious award is Edward Gasambelo.  He received the citation as PRC Outstanding Master Plumber.  He is presently the General manger of GEEP Construction Supply and Services.

He is involved in the design, planning and preparation of various buildings, malls, hotels, commercial and residential buildings in Bacolod City. He also offered his “free plumbing plans” project for Gawad Kalinga and other low-cost housing projects in Bacolod City. He was also one of those who pushed for the standardization of professional charges in plumbing in the revised Master Plumbing Code of the Philippines.

UNO-R is proud of you!