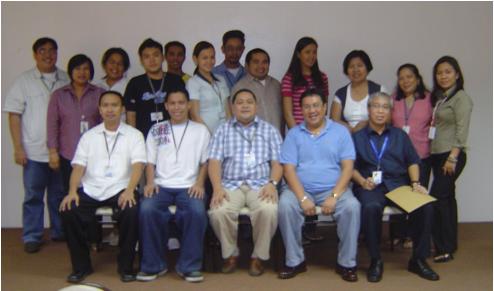 UNO-R Tuition Fee Consultation: seated: Fr. Joel Alve, OAR, Mr. Ivan Roger Bullos, Fr. Sixto Bitangjol, OAR, Mr. Antonio Gargarita, Fr. William Villaflor, OAR. Standing:  Mr. Carlos Legaspi, Jr., Judy Legaspi, Connie Po, Jefferson Nagtalon, Beljun Tulod, Channel Dimayuga, Freddie Parreño, Bro. Jaazeal Jakosalem, Eamay Apostol, Alma Lopez, Eden Galve and Dr. Nena Samillano.
The Union proposed to the administration for an increase in salaries to battle the rise of the prices of basic commodities. The administration agreed to increase the salaries and proposed for a ten (10) percent increase, contrary to reports of a 14% proposed TFI.. So, a consultation was held with the legitimate student representatives.
After the second leg of the consultation and after hearing both sides (faculty and students), UNOSSGO President Ivan Roger Bullos stated his agreement to the legitimacy of the requests. He further stated that upon his agreement, he wish to see more physical developments in the campus.  He also noted that after the UNOSSGO sponsored forum held last February 19, majority of the students understand the need for an increase in the salaries of their mentors and also saw the legitimacy of the 10% increase.
The consultation cordially ended with the thanksgiving of the Union President to the administration and the students for their wisdom in augmenting the salaries of the faculty and employees of UNO-R. Likewise, the Fr. President thanked all members of the different panels for ventilating their sentiments for the development of the Cradle of Excellence, UNO-R.
Meanwhile, the office of Student Affairs have identified the 10 persons staging the rally while the consultation was on-going. There were only two enrolled students in the group of ten.  Others who gave statements to the media were not connected in any manner with the university.