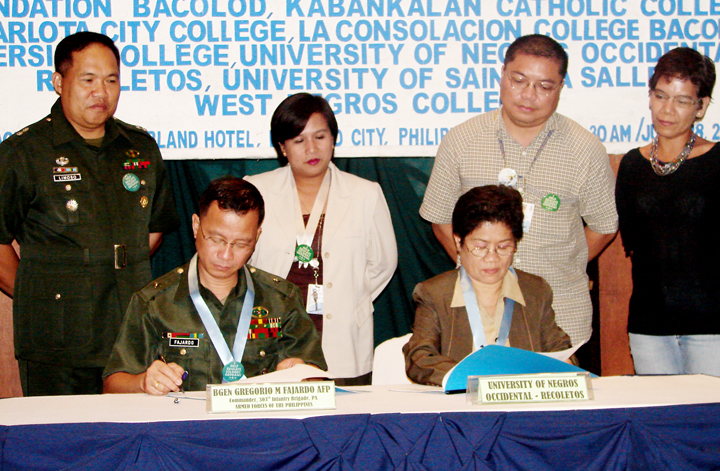 The University of Negros Occidental-Recoletos Bacolod signed a memorandum of agreement with the Armed Forces of the Philippines Educational Benefit System (AFPEBSO) that grants full scholarship to three (3) dependents of soldiers killed-in-action. Witnessed by other grantor schools in Bacolod, the agreement was signed in a simple ceremony at the Sampaguita Hall of the Sugarland Hotel.

The scholarship grant covers tuition fee and other fees except those paid to outside agencies or institutions. The program applies to any undergraduate course except Bachelor of Science in Medical Technology, Nursing, Law and other related allied health courses at UNO-R Bacolod. The University assures the grantees of the continuance of this benefit until graduation from the courses if he or she will not violate any of the provisions provided in the agreement.

In his message read before those present, UNO-R Bacolod President Fr. Demetrio S. Peñascoza, OAR conveyed his appreciation to the AFP for involving the school in the project. “We hope that whoever qualifies for the program should be somebody who really deserves it”, Peñascoza said. “We do hope they would really treasure it in the same manner as we treasure the services of their parents to our country,” he added.

AFPEBSO Finance Manager Captain Patrick B. de Villa of the Philippine Army revealed that since 2005-2007 there were 728 soldiers who died in combat. The three most recent happened in Negros Occidental in the first quarter of this year.

Applicants for the educational benefit program shall be accepted at the start of every school year. AFPEBSO shall process and recommend approved applicants for this program to UNO-R Bacolod that in turn administers admission examinations and other admission procedures.