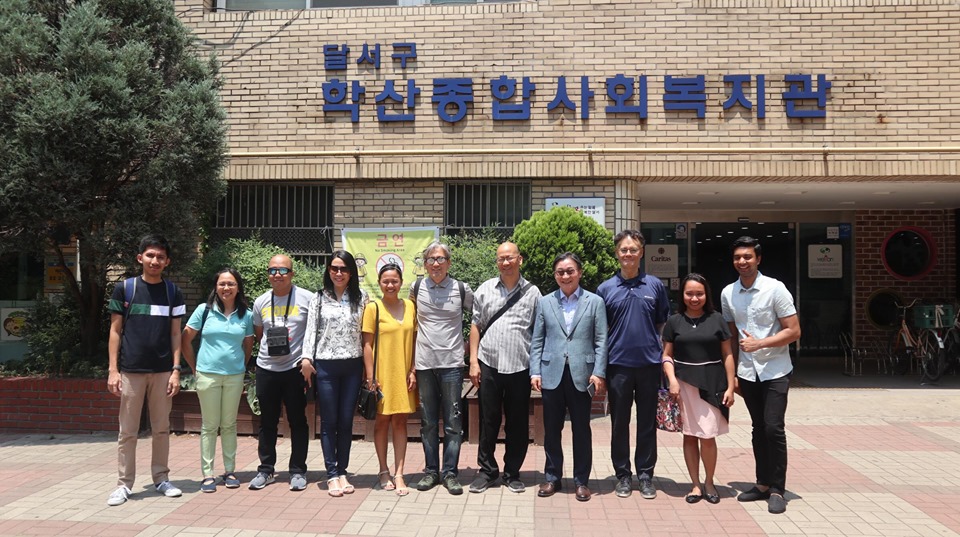 As part of the agreement for a stronger partnership of the university with the Global Workers in Daegu (GWD), representatives from the University of Negros Occidental-Recoletos through the University Community Development Office (UCDO), and its partner community, the Recoletos Social Outreach Center (RESOURCE) were invited for a talk-concert and other productive activities and exposures in Daegu, South Korea from June 24 to July 1, 2019.
The main objective of the visit is to report about the case of RESOURCE Handumanan during the Talk-Concert seminar with the theme, “The Caritas Spirit Based Practice of Foreign Aid.”
Fray Ronel P. Gealon, OAR, Vice-President for Administration of UNO-R and RESOURCE president, who also headed the visiting team gave a talk about “The Meaning of Solidarity in God’s Love.” Dr. Richelle H. Verdeprado, RSW, head of the Social Work Program in undergraduate level and in graduate school shared about the application of Social Work Practice in the different programs supported by the GWD, specifically the Food for Work and the Local Exchange Trading System (LETS) which benefit the RESOURCE residents. The concert also aims to share experiences and ideas about community-based social work practice in Daegu and Bacolod, community development and leadership.
The Talk-Concert which was held on June 26 was attended by the social workers and leaders of the Caritas Daegu. It is also part of the celebration of the 10th year anniversary of Caritas Daegu. Other members of the visiting time aside from Fr. Gealon and Dr. Verdeprado were Ms. Elinor Mariano, RESOURCE Bookkeeper, Aaron Kim Gil, RESOURCE Social Worker; Mr. Joey B. Jolito, UCDO Coordinator in the Campus Ministry Office; Ma. Joy de la Cruz, UCDO Staff; and Ms. Ophelia B. Caytiles, UCDO Coordinator in the Integrated School. They were welcomed in Daegu by the Secretary-General of the Caritas Daegu, Catholic Archdiocese of Daegu, Korea Fr. Hongdo Park Cyril, Chairman of the Association of Social Welfare Facilities in Caritas Daegu Mr. Albert Song, Jee-Woong Kim, President of the Global Workers in Daegu and all members of GWD.
Moreover, the team was able to be oriented about the different social welfare agencies in Daegu offering developmental services and assistance, especially for children, the elderly, those with special needs, those who are differently able and those who would need livelihood support. They were also able to visit the Community Welfare Center Haksan and Caritas Daegu Office. A bench-marking at the College of Nursing of Keimyung University was also done, with the team taking a look at the different modern facilities in their college and in their library and also in their newly-opened hospital.
On June 27, the the visiting team was able to visit Chilgok Multi-Culture and Chilgok Senior House. Fr. Gealon also presided a mass for the Filipinos working in Daegu at the Assistance Center for Foreigners. The team also visited the Seongju and Ansim Social Welfare Center, St. Joseph House and museums in Daegu.
The Sunday Mass at the Cathedral of Archdiocese of Daegu on June 30 was also co-celebrated by Fr. Gealon. It was a heartfelt mass especially that it was attended by many Filipinos who are working in South Korea. (News by Dr. Richelle Verdeprado, RSW and photos by Rev. Fr. Ronel Gealon, OAR, Dr. Verdeprado and Joey Jolito)