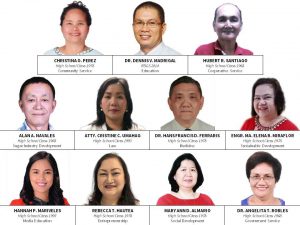 The Blue and Gold Alumni Association has cited 11 alumni of the university as Outstanding Alumni Achievers in their field. They were awarded during the Gran Alumni Homecoming Night at SMX Bacolod last September 29. The 2018 Outstanding Alumni Achievers are:
DENNIS MADRIGAL, PhD – Education
Dr. Madrigal holds Doctor of Philosophy degree in Educational Management.. He was appointed to be the Associate Dean of Recoletos de Bacolod Graduate School last June 2018. He is a member of various local and international professional research organizations. He received the best paper (education strand) Award during the 2nd Recoletos National Research Congress at the University of San Jose -Recoletos, Cebu City. He is also one of the pillars of the Philippine Association of Catholic Religious Educators (PACRE). .He is also the recipient of the 2014 Service award for his 20 years of service to UNO-R.
ANGELITA TUBA – ROBLES, DMD – government service
Dr. Robles is a member of the Golden class of 1968. She has dedicated more than three decades of her dental profession in the government service. She has served the rural communities of Calatrava, Toboso, Escalante, Sagay, Manapla, Victorias, and EB Magalona in Negros Occidental. Her assignment as the Chief, Dental Department at CLMMRH, Bacolod culminated her professional career in 2013.
ALAN A. NAVALES – Sugar Industry Development
Mr. Navales belongs to the Golden class of 1968. For the wheel to turn and the engine to run, it needs the essentials cog. In the Sugar Regulatory Administration (SRA) unassuming but no less important cog that dedicated 28 years of his life to loyal, conscientious work, traveling on the road all over Negros, fulfilling his duties for the sugar industry. In the past he was a recipient of seven awards given by SRA and different sugar mills recognizing him as highest -rated for exemplary government service in the development of the sugar industry. Mr. Navales in the eldest of the 11 Navales siblings who all went to UNO-R High School.
HUBERT SANTIAGO – Cooperative service
Mr. Santiago worked as Consumer Coordinator of Central Negros Electric Cooperative (CENECO). He is a member of the Golden Class 1968. He had been cited as an outstanding employee of CENECO, in the region and was also recognized nationally.
ATTY. CHRISTINE COSADIO – UMAHAG -Law
Atty. Christine is a member of the Silver class of ’93. She graduated “cum laude” with a degree in BS in Accountancy and also got her Law degree from UNO-R. She has been in government service for more than a decade and continues to provide her devoted service to the underprivileged members of the community as a Public Attorney II at the PAO- Bacolod district. Her core values SIMPLE ( service, integrity, moral and Marian devotion, peace and justice, love and passion for Excellence) have served as inspiration to others.
HANNAH PAPASIN – MARIVELES – Media Education
Ms. Hannah is one of the SILVER Jubilarians. She earned her AB Mass Communication degree “cum laude” in 1997 at the USLS. She joined the academe in 2004 and her contribution to the fields of education, research and media-related and linguistics studies have highlighted her outstanding accomplishments in media education.
HANS FRANCIS D. FERRARIS, MD, FPSP– Medicine
Dr. Hans earned his Doctorate Degree in Medicine from West Visayas State University in Iloilo and his Masters degree in Public Administration from Guimaras State College. He currently serves as Head of the Department of Pathology of CLMMRH, Bacolod and concurrently the chairman of the Department of Pathology, USLS College of Medicine. Dr. Hans has received numerous awards as Professor and practitioner in the field of Pathology and Medicine, the highest is the 2012 national award for outstanding service presented by the Philippine Red Cross. He belongs to the UNO-R HS class ’78.
ENGR. MA. ELENA RELIQUIAS – MIRAFLOR – Sustainable Development
Engr. Miraflor is a Civil Engineer. She got her degree from Silliman University. She belongs to UNO-R High School Class ’78. As a Civil Engineer, her business provided employment and a better future for the less -privileged not only in Hinoba-an but also in North Cotabato, Cebu and Davao. Her pioneering works which benefited the indigenous people (the Manobo and Bagobo tribes of Mt. Tiko, Magpet, North Cotabato) have showcased her extraordinary sense of humanity and her untiring efforts have stimulated the grassroots community and alleviated poverty.
RECECCA TONGOY – HAUTEA– Entrepreneurship
Mrs. Hautea finished her High School at UNO-R in 1978 making her an active member of the Ruby class. is a graduate of UP-Visayas with a degree of BS Business Administration, major in Accounting. She has extensive professional experience as a CPA practitioner and currently works as Chief, financial and Operations Officer of the Film and Media Arts International Academy, Inc. She has displayed exceptional leadership and entrepreneurial acumen in the tourism and travel industry which has uplifted tourism standards and promoted urban tourism that stimulated economic growth and opportunities and enhanced the image of Bacolod City.
CHRISTINA OROLA PEREZ, PhD – Community Service
Dr. Perez belongs to the Ruby Jubilarians (UNO-R HS Class ’78). She is currently engaged in the Executive Directorship of the family group of companies. Parallel to her corporate responsibilities, she also provides for sustainable livelihood skills for the women in the community and education for deserving scholars. Her remarkable community works in women empowerment and spiritual upliftment have brought a considerable and tangible impact on the lives of the people she serves.
MARY ANN ALMARIO – Social Development
Ms. Mary Ann is a member of the Ruby class ’78. She holds a BS Degree in Chemistry from the Colegio San Agustin – Bacolod. She earned her post-graduate diploma in Agricultural Studies (Food Services) from the University of Queensland, Australia in 2000. Her accomplishments in the field of Agriculture ensuring food security, particularly on farmers empowerment to increase farm production and self -reliance have highlighted her outstanding achievements.
(Thanks for the information from 72nd Grand Alumni Homecoming program published by the Ruby Jubilarians)