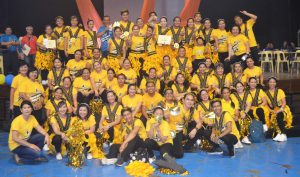 Human Resource Management and Development Office sponsored the 2018 Dance Craze last September 10, 2018 at the university gymnasium. The participants were members of the university community. They were divided into teams and tried to outdo each other, but in the end, the best among the best is the Gold Team which was named Champion. 2nd place was the Red Team, 3rd was the Blue Team, and 4th was the Orange Team. Special Awards were also given, such as Most Participative Group was given to the Gold Team and Best in Dance Parade was the Red Team. (Bianca Cababahay, BSMC 1)