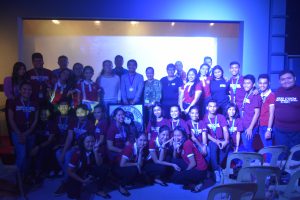 August 15, 2018, Mr. Peter Solis Nery graced the awarding of the grand champion of the Peter’s Prize 2018 Awards. Peter Solis Nery is a poet, fictionist, author, and film maker. He is a Hall of fame awardee of the Carlos Palanca award for Literature in the Hiligaynon writing. He is the President and founding chairman of the Peter Solis Nery Foundation, which aims to help preserve the rich culture and arts of Western Visayas. Mass Communication students took part in the activity and some of them were tasked to read the selected poems of the winners of the 2018 Peter’s Prize Awards. The contest was launched to inspire budding literati of Hiligaynon and preserve the rich culture of Western Visayas. This year’s finalists were Chona V. Gosiaoco, UNO-R Masscomm faculty; Mr. Ismael Java, STI-WNU cultural director; and Mr. Marcito. They witnessed the awarding of this year’s Peter’s Prize awardee – Mr. Serafin Plotria, professor of UNO-R College of Arts and Sciences Mass Communication Department. (by Andrea Amisola, BSMC 4)