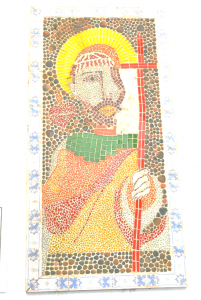 Saint Ezekiel Moreno was born on April 09, 1848 at Alfaro, La Rioja, Spain and died with cancer of the palate on August 19, 1906. He was an Augustinian Recollect missionary first assigned in the Philippines. He was ordained deacon in Jaro, Iloilo on 1870 and was ordained to the Priesthood on 1871. He was assigned in the parish of Calapan, Mindoro and was then transferred to the Penal Colony in Palawan. He laid the foundation of Inagawan Parish. Malaria struck him and ended his pastoral ministry in Palawan. He received Hydrothrapheutic treatment for his anemia under Rev. Fr. Fernando Cuenca in Talisay, Negros Occidental in 1873. He got cured and returned to Manila and was assigned to Calapan , Mindoro. He was appointed as Vicar Forane and Provincial of Mindoro. He was transferred to Las Pinas where calamities struck the place and took the lives of many. He stayed with the people and continued his pastoral work with them. In 1879, he was then transferred to Batangas and with all o3dience he followed his superiors despite the protest from the faithful. In 1880, he was transferred back to Manila and was appointed General Preacher of the Order. In 1882, he was assigned to Cavite and the horrifying cholera struck the place. Fr. Ezekiel worked hard that all the faithful would receive the Last sacraments. In 1885, his Superiors recalled him to Monteagudo, Navarra, Spain to train future missionaries to Asia and America. In 1888, he headed to Colombia as Superior of the mission to restore the Recollect Order. He was then made as Apostolic Vicar of Casanare and later became the bishop of Pasto, Colombia. In the mid 1905, he was diagnosed with cancer in the palate. He was operated several times without anesthesia. On August 19, 1906, he resigned to the mercy of God. He was beatified by Pope Paul VI on November 1, 1975 and was canonized by Pope John Paul II in 1992 and was made Patron Saint of Cancer patients. (data from the booklet by Prof Romanillos and Mosaic Art by Bro. Jaazeal Jakosalem, OAR)