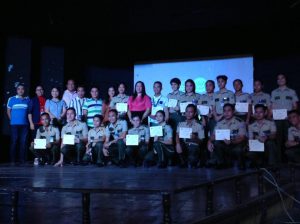 CCJE holds its General Assembly and awarding of Dean’s Listees for the second semester of AY. 2017-2018. Ms. Nathalie Louise Angelica Mediana, and Imae Batan, fourth-year students were awarded with Gold medals. After which the JESC Council presented their financial reports for the second semester and summer. Dr. Jasmine Parreño welcomed the students, parents and faculty while Ms. Dioneo, JESC Governor did the closing remarks. Part of the General Assembly was the Dean’s Hour where the Dean encouraged the students to study harder and must observe proper discipline and emphasized that as future law enforcers, they must be courteous in all their dealing. She further stressed that intelligence in nothing without good values, that is why as recoletos products, they have to observe and bear in mind the philosophy of St. Augustine – Caritas et Scientia. She also declared the opening of Criminology days (Aug. 13-18). The line-up of programs Year level debate competition, poster –making contest; Martial Arts competition; shooting competition and literary-musical contest.