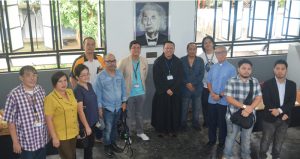 The University of Negros Occidental – Recoletos unveiled the “Kinetic painting” donated by Bacolod Artist and UNO-R alumnus Rommel Clavecillas, CE., July 6, 2018. The masterpiece is entitled, “Albert is watching you.” Is a portrait of one of the greatest men in the world of science, Albert Einstein. The rites were attended by Rev. Fr. Don H. Besana, OAR, UNO-R President; Rev. Fr. William Villaflor, OAR, House Prior; Rev. Fr. Jose Teodulfo Jadulco, OAR, Property Administrator; Dean Owen Martir, CE, Ed.D; Engr. Christopher Taclobos who also unveiled the artwork. Mr. Gerard Wassily Clavecillas on behalf of his father thanked the University for accommodating his Father and explained the role of Albert Einstein in the world of science. Art Association of Bacolod President Leah Samson and her husband was also present during the ceremonies. The painting is mounted at the St. Joseph’s Hall (College of Engineering building). Engr. Clavecillas is affiliated with the National Commission for the Culture and the Arts; Negros Art Attack Collective and the Art Association of Bacolod. He has had local, national and international art exhibits. He had one in Buckwild Gallery, Venice Beach, California in 2009. “The artwork becomes my legacy to my beloved alma mater, UNO-Recoletos. It is UNO-R that has made me an engineer.” Clavecillas shared. He got his Civil Engineering degree from UNO-R in 1984 and immediately passed the Board Examination. He is an engineer by profession and an artist by vocation. When asked why is Albert Einstein his subject and why the title, he explained that he made Einstein his subject because he sees him as someone who thought “out-of-the-box”. He is unconventional and he is very intelligent. He is not fearful of discovering new things. I want him also to be an inspiration to all students, especially in the College of Engineering. I wish that my work will inspire them as Albert will always be watching them.