PDEA IS SPEAKER AT VALLADOLID 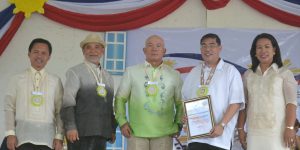 Carlos Eduardo Legaspi, Jr., PhD, Director for External Affairs was invited as guest speaker during the Kalayaan 2018 program of the Municipality of Valladolid, June 12, 2018. He was met by the members of the Municipal Council and the Mayor of Valladolid, Hon. Enrique Miravalles. The invitation was made by Valladolid National High School through the Principal, Mrs. Maritess Rivera and teacher, Ms. Bea Castaňeda,MAEd. In his speech, Legaspi traced back the history of independence after the June 12 declaration by Emilio Aguinaldo. He also scored that the celebration would only be meaningful, if one goes back to the colorful events in the life of our country and people. Legaspi also scored the presence of America in all of the liberations and independence of the Philippines. On the other hand, Mayor Miravalles, in his message, pointed out that the abuses during the Spanish period should be eradicated in today’s society. He made mention of “polo, falla, tribute, encomienda, bandalla, and the Galleon trade as sources of exploitation and oppression. (news and photo by Joeny Jurilla, BSBA, READS – External Affairs Office).