VISIT FROM A JUDO GRANDMASTER 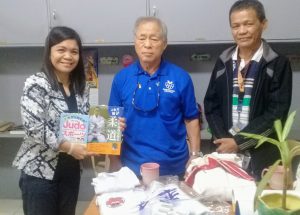 Grandmaster Shigeru Kariya, a red-belt holder and the president of the Kashima Junior Judo Sports Club, Visited UNO-Recoletos last February 15, 2018. During the said visit, Grand Master Kariya inquired about the state of the practice of Judo as a martial art in the University. He was informed that basic Judo is taught as part of the Defensive Tactics course of the Criminal Justice Education Department. Being an icon of Judo in Japan, Grandmaster Kariya was concerned about the instruction of Judo, being a highly esteemed art form, especially in the area of training equipment and uniforms. Training equipment and uninforms are not readily available in the Philippines and are very expensive. Seeing the predicament of Judo instruction in the University, Grandmaster Kariya donated three (3) sets of Judo uniforms and informed the Department Head that there is a possibility that they may donate training mats and uniforms in the future. Grandmaster Kariya was really interested in making UNO-R one of the training centers of genuine Judo and in this regard a Memorandum of Agreement was drafted to make this endeavour a reality. Grandmaster Kariya is a cancer survivor whose advocacy is the promotion of the advancement of Judo as a martial art and as a way of life around the world. (JEAN B. PAUYON)