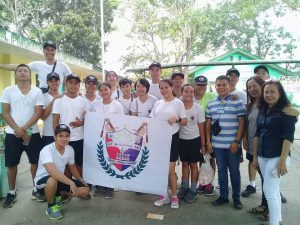 In connection with the above avowals, the Criminal Justice Education Department under the College of Arts and Sciences had their Intern class of 2018 Kalasag collaborated with the three Barangays in Bacolod City namely Barangay Taculing alongside with Barangay Captain Alexander Diamante ; Barangay Alijs with Captain Venber Ray Buenafe and Capatain Suansing for Barangay Mansilingan. The aforementioned personalities have positively signed the Memorandum of Agreement between their respective jurisdiction and College of Arts and Sciences under UNO-Recoletos. An optimistic view was expected beforehand during the signing wherein both parties were aiming for symbiotic benefits for long time relationship and bilateral unity on upcoming projects. Subsequently, the Criminology Interns were properly allocated to three sponsored Barangays. The first team is Team Taculing was the first group who commenced with the community on the 22nd of February under the supervision of Mr. Mark A. Ayala.second team, Team Alijis headed by Dr. Jean B. Pauyon bagged a successful community immersion in cooperation with the energetic Barangay Captain Venber Ray Buenafe which started on the 23rd of February. They were also confirmed and welcomed by Captain Buenafe’s Barangay kagawads as a sign of unity and support. Then the group immediately packed up and bellicosely proceeded to purok Malipayon, one of the poorest puroks in the area with the aim of reaching out the residents who are considered victims of poverty. The team administered a feeding program with 50 respondents. A Zumba fitness dance was hosted by the Barangay council at around 5:30 pm. Obviously, Interns and Dr. Pauyon wanted to sweat out the all their worries. The team is Team Mansilingan,spearheaded by Mr. Nelson Trujillo, had their immersion at Baranagay Mansilingan. A courtesy call to Barangay Captain Suansing ws done. An information drive was given to Grade 10 senior high school students of Mansilingan Agro Industrial High School on community anti-terrorism and awareness. the Interns then held a feeding program to purok Kabugwason and Bangga Ceres after the seminar at MAIHS. Other activities were also done on the 2nd day. (Mr. Mark Ayala, RCrim, faculty)