Red Stallions was declared as the overall champion for Sportsfest 2018 besting three other teams with a 92% average and 400 points. “Nagdaog kami kay first of all nagsalig kami saamon kaugalingon kag kay God, hambal gani sa Matthew 17:20 ‘faith can move mountains’,” said Kenfred Alcala, Red Stallions’ team governor. [We won because we trusted ourselves and God, as Matther 17:20 says ‘faith can move mountains.’,”] Green Stags followed behind the Stallions as the 1st runner up with an average of 81% and 345 points. Blue Peacocks and Yellow Jaguars settled at 2nd and 3rd runners up for 71% and 66% average with 340 and 295 points, respectively. This year’s Most Valuable Players were: Joshua Garanganao for Boys Basketball, Ramonaliza for Girls Basketball, Alaysah Salim for Girls Football, Federico Gale III for Boys Chess, Gerd Fritznyl Yap for Boys Table Tennis, and Gavrielle Gold Murillo for Girls Athletics from the Red Stallions, Joshua Perucho for Boys Volleyball, Leila May Doneza for Girls Table Tennis and Rainniel Villaruel for Boys Athletics from the Green Stags, Rachel Marie Estebor for Girls Volleyball, Carlos Castro for Boys Football, and Erica Domingo for Girls Chess from the Blue Peacocks. “I’d like to pose praises and congratulations to everyone especially the HSSAO for a successful sportsfest is a fulfillment and a form of a championship,” Dustin Ryan Veridiano, HSSAO President said at the end of the program. The awarding ceremony was preceded by the search for Mr. and Ms. Sportsfest 2018.

Meanwhile, Joseph Acutayan and Joyce Cepeda of Blue Warrior Peacocks were hailed as Mr and Ms Sportsfest 2018 at the University Auditorium, today. Cepeda bagged Ms. Magnetic, Best in Production, Best in Sports Attire, and Face of Hitsura awards while Acutayan garnered Mr. Magnetic and Best in Production awards. “Just like what I said a while ago, I am ready to receive victory with humility and accept defeat with confidence,” Cepeda said. Meanwhile, Christian Matthew Obligado and Erika Telis of the Red Stallions, Jessie Jude Genise and Aira Celis of the Yellow Jaguars and Cherry Bales of the Green Stags followed as 1st, 2nd and 3rd runners up, respectively. Obligado received Mr. Photogenic, Challenger of the Year while Telis gained the Challenger of the Year award. Other special awards were given to Bales as Ms. Congeniality, Genise as Mr. Congeniality and Best in Sports Attire, and Celis for the Ms. Photogenic award. (lifted from https://www.facebook.com/starlightunorhs/) 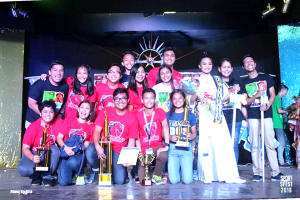