Christmas around the world at UNO-R

“Glory to God in the Highest and Peace to His people on Earth” was the greetings of the angel to the lowly shepherds during the proclamation of the birth of Christ. 2017 Christmas party of the UNO-R community was anchored on Peace as the greetings would say. The university community opened its Institutional Christmas Party with a Eucharistic celebration at the oratory with Recoletos de Bacolod Prior, Rev. Fr. William Villaflor, OAR as Main celebrant. A short para-liturgy for peace was held at the entrance of the Oratory after the Mass. Fr. President and UNOFELA president Engr. Noli Ortiz sent off the Balloons of Peace signifying the commitment of the UNO-R community to peace. Rev. Fr. Don H. Besana, OAR, the UNO-R Vice President for Academics and the Overall Chair of the Christmas Party 2017 gave his Welcome Address afterwards Fr. President gave his Christmas Message. The Knights of Columbus opened the program with their rendition of “Glory to God in the Highest” with an interpretative dance by Ms. Rachel Amparo and the Grade School Faculty. A Creative Native Dance was performed by the Lay Administrators interpreting the Asin’s song ”Cotabato” which ended with a procession of the Religious Administrators holding the P-E-A-C-E word with Mary and Joseph following. During the Christmas program, the Teaching, ANTP and NTP prepared dance numbers interpreting “Christmas around the world”. Mrs. Barbie Cordova of the Senior High School performed as Mrs. Santa Claus. After the Christmas Program, a contest for the best in costume was held. Mr. Lino Sumbillo, SDPC Director and Mrs. Lilibeth Hablo, RN, our school nurse, won the best in costume male and female categories, repectively. The judges were Mr. Antonio Gargarita, Mrs. Mary Jeannie Bayona and Atty. John Paolo Villasor. (by Christian Cadiao, BSMC IV, DEA intern) 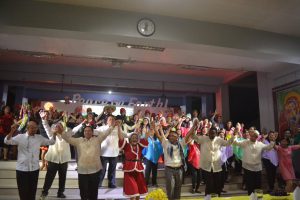 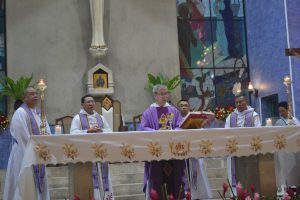