At 3:36 a.m. of August 09, 2017, Fr. Pedro Abapo Escanillas, OAR passed away due to brainstem failure secondary to cerebrovascular accident and multi-organ failure at the Dr. Pablo Torre Memorial Hospital.  He was 69 years old.

On August 12, he was laid to rest at the Bacolod Memorial Park after the 8:00 a.m. Concelebrated Funeral Mass at the Oratory of San Nicholas de Tolentino.  Fr. Dionisio Selma, OAR, Prior Provincial, led 34 priests during the concelebrated funeral mass.  He was joined by Bacolod House Prior Rev. Fr. William Villaflor, OAR; Vice Prior Rev. Fr. Ronel Gealon, OAR; UNO-R President Rev. Fr. Eduardo Celiz, Jr., OAR; and Fr. Escanillas’ classmate Rev. Fr. Hernando Coja, OAR at the Main Altar.   During the homily, Fr. Selma read the letter from Rev. Fr. Miguel Miru, OAR, Prior General, sending his condolences and sympathies to the OAR Province of St. Ezekiel Moreno for the demise of Fr. Pete.  Fr. Provincial then hinted that there is an expression of joy among the OAR priests because of the faith in the resurrection.  “Our faith in Jesus will sustain us, and we only die in body,” he added.  Fr. Selma shared that death has three effects: magnifying, magnetic, and magnanimous effects.                  The magnifying effects of death are found in the good deeds of the person which are said during his death.  “We often hear the goodness of the person magnified as he lays on the tomb,” Fr. Selma said.  The magnetic effect is that death brings everyone together while the magnanimous effect is in the reminder that death is a great equalizer.               The Prior Provincial ended his sharing with a reminder that God should always be in control of our lives.  Before the end of the Mass, Fr. Villaflor read the Protocol from the Prior Provincial about the demise and the life of Fr. Pete.      A tribute was prepared by the UNO-R community for Fr. Pete; the tribute was offered by the Secular Augustinian Recollect Fraternity, the Scholarships Office with the READS scholars, and by the member of the family.    Despite the heavy downpour, Fr. Escanillas was laid to his resting place after the burial rites at the Bacolod Memorial Park in Alijis, Bacolod City. 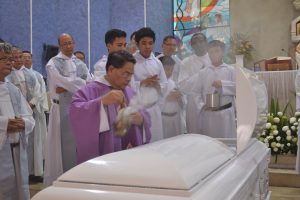 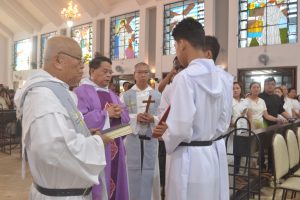 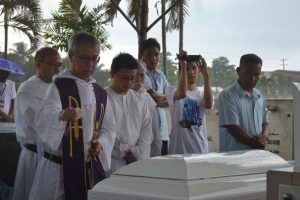